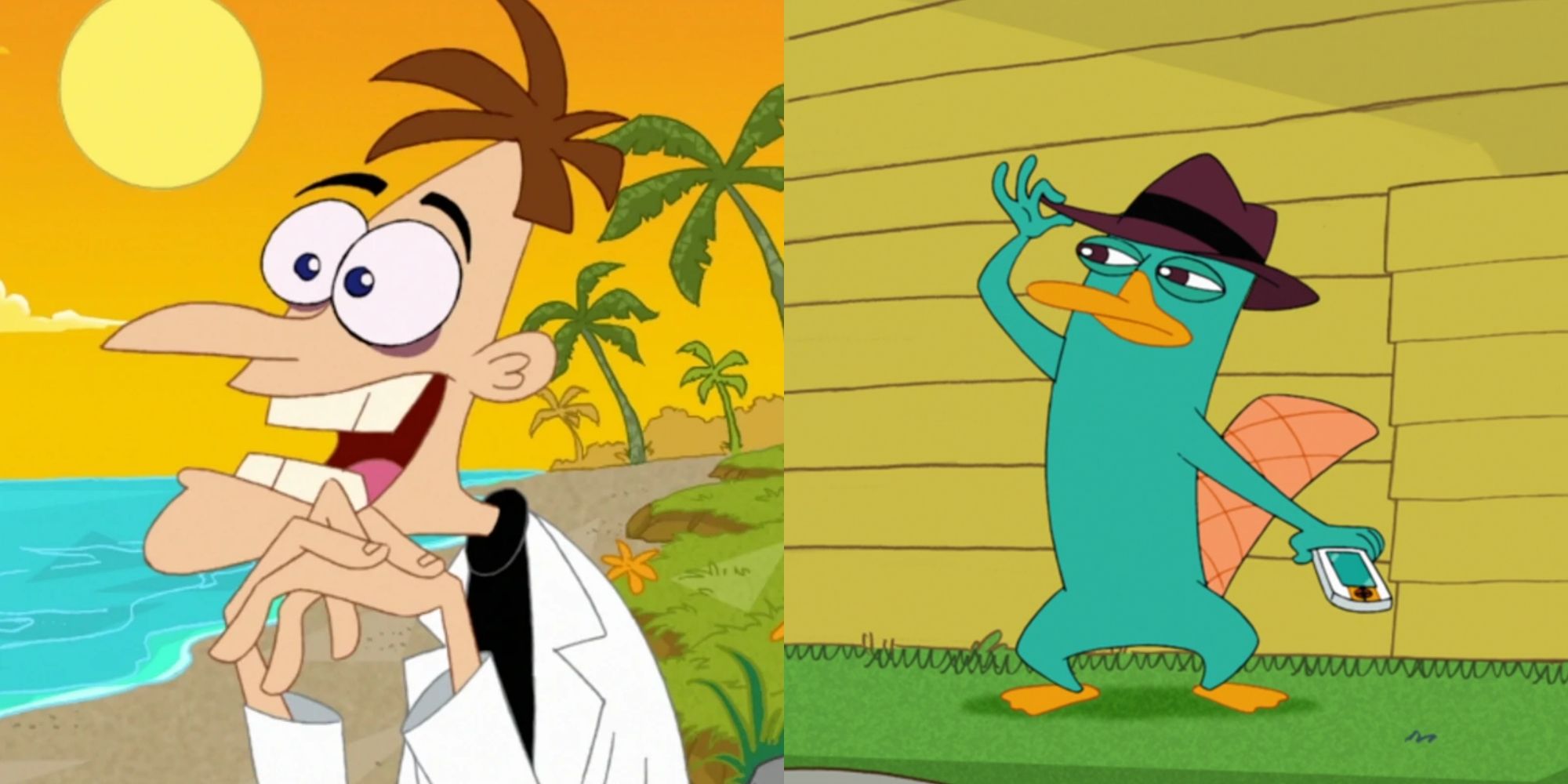 One of the most epic and cohesive parts of Phineas and Ferb was the endless battles between Dr. Doofenshmirtz and Perry the Platypus. Each episode would bring a new initiator, a ridiculous new pet peeve from Doof, and a new way for Perry to defeat him quickly and easily. It was their thing, and fans can watch it again on Disney+.

Their fights provided plenty of comedy for the show, as Doof was usually thwarted by trivial, non-meaningful issues, but they also sparked a surprisingly sweet and caring relationship between the two foes. Some battles stood out above the rest, either through hilarity or sheer grandeur, and these are the best of the best.

In “Lights, Candace, Action!” it came as a surprise to everyone when Dr. Doofenshmirtz proclaimed that he had given up his life of crime to pursue cheesemaking. It was no surprise, then, that he quickly returned to villainy after Perry ate his entire wheel of cheese.

A charming and amusing battle scene then ensued between a ridiculously wheel-shaped Perry and Dr. D, and it was a treat to see the monotony of their fights interrupted by Perry’s unusual shape. The Platypus was generally in great shape, and seeing one of his weaknesses being the lure of a wheel of cheese helped deconstruct his seemingly stoic and invincible personality. And it also made for a very good fight.

Since the characters remained static throughout Phineas and Ferbas the premise was Endless Summer, it was surprising and cool to see older versions of Perry and Doof in “Phineas and Ferb’s Quantum Boogaloo” when the episode premiered.

They fought hard over a game of chess, and things heated up after Doof tried to cheat during his turn and Perry threw away his dentures. As the scientist drives away on his scooter, Perry follows closely with the help of his tennis ball walker. The battle may be underwhelming compared to their youth, but it’s a sweet indication that even in old age, the two are up to their usual shenanigans, and it’s definitely a fight to remember.

“Crack that Whip” debuted well in Season 1 of Phineas and Ferb, and by his arrival the repetitive nature of Dr. Doofenshimirtz and Perry’s battles had been deeply established. The viewer knew what to expect by then, so it was a refreshing twist when Doof turned out to have a headache in the episode.

Things get meta and interesting fast, as Doof tells Perry to just turn off his invention because he knows it would happen anyway. He then says, “I promise to be meaner next time,” and it’s a fun joke that pokes fun at the stereotypical nature of Doof and Perry’s interactions. Dr. D’s insight was one of the first examples of that self-conscious tone that characterized the series, and it made for a particularly notable battle.

One of the best fights between Perry and Dr. Doofenshmirtz didn’t even involve Perry at all. In “Misperceived Monotreme”, Perry cannot escape Candace’s attention, and a random platypus wanders into Doof’s lair in his place. And, miraculously, the fake Perry foils Doof’s plan even better than the real one could have.

The tension over what’s to come makes this battle one of the best, as the usual expectation that Perry would obviously triumph was out the window. The viewer had no idea how the fake Perry could win, and this uncharted territory led to an epic showdown with real stakes at hand. It’s just a shame the fake Perry never got the recognition he deserved.

The huge ball of aluminum foil

The one and only tinfoil ball in “The Rollercoaster” set up the Dr. Doofenshmirtz-fights-Perry premise, and the various beats of that initial battle scene were repeated countless, many times throughout. series. It helped establish the comedic, over-the-top tone of their fights, and was the only one ever fully reimagined, as seen in both “Phineas and Ferb’s Quantum Boogaloo” and “Rollercoaster: The Musical!”

It was a defining moment for the show and the relationship between the two, as well as Perry’s signature “grrr,” and it’s memorable for all the right reasons.

Dr. Doofenshmirtz had an interesting sense of logic, and this trait was perhaps best expressed in the episode “Doofapus”, when he transforms into a platypus to gain the advantage over Perry. Because, apparently, “the best way to beat a platypus was to become a platypus.” His words.

Doof may be a genius inventor, but his decision to go from a bigger, stronger animal (a human) to a smaller, cat-sized animal (a platypus) was questionable at best. However, it did lead to an entertaining and unique battle between the two, as well as some sweet platypus bonding moments that might never have happened otherwise.

In the episode “Last Day of Summer”, Candace accidentally creates a time loop and Doof gets stuck in an endless cycle with Perry. In the end, he realizes he’s not a villain at heart, and he decides to really join the OWCA. It’s an interesting final battle, as their fight repeats over 20 times, and it ends with a final tribute to the “loop” of battles. they were stuck until Doof changed his mind.

The battle was quite epic in its scale and complexity, and it was a fitting ending to the complex and deep relationship that Perry and Dr. D shared on the show. Plus, the edit came with a brand new song, Disney style.

Perry never took Dr. Doofenshmirtz too seriously until the episode “Journey to the Center of Candace”. As he prepares to fight in his usual way, Doof unwittingly threatens Phineas and Ferb, and it’s a big mistake. Perry snaps him out, handcuffs him, and calls the police.

It’s the only time Perry turns his nemesis into cops, and it’s also the fastest he’s ever defeated, as he usually lets Doof monologue and trap him as he pleases. This battle reflected the instinctual protection Perry had over the boys, and it also represented the affection he must have had for Doof to indulge in all those previous “captures”.

The best part of the battles between Doof and Perry was the close emotional relationship they ended up forming by the end of the series, and the episode “It’s About Time!” brought it to this next level. Both end up on the show Dr Feelbetter to talk about Doof’s “affair” with his ex-nemesis Peter the Panda, and they make amends after Doof promises to hurt Perry “in the right way”.

After that promise, Dr. D unveils a villainous new plan, and he and Perry face off the old fashioned way with armchair projectiles and giant freeze rays. The battle is important because it helps express how cartoonish violence often means Doof and Perry’s love language, and it’s an important basis for the fuzzy and frantic territory they end up falling into in the final season.

“Does this duckbill make me look fat?” had one of the best storylines of the entire series: Perry and Candace switching bodies. A simple summary, but one could easily imagine the hilarious and convoluted results a body swap like this could lead to, including the absolute best battle scene between Dr. Doofenshmirtz and Perry.

No one could have ever imagined that Candace and Dr. D would have a fight scene, but this episode made it happen in an incredible twist. Teenage Perry tries to whack Doof with his tail only to find he’s out of it, and he quickly has to re-evaluate his fighting style. It’s a fun, one-of-a-kind duel between enemies, and it seriously could have gotten its own spin-off.

Tyler lives in Davis, California with his wife and two chihuahuas. He’ll soon have an English degree from UC Davis under his belt, and he’s thrilled to have a job that incorporates both writing and everything he loves to talk about (Avatar, The Office, The MCU, and many others). Tyler also has a passion for creative writing, especially in the form of short stories, and one of his favorite novels right now is ‘There, There’. Other activities Tyler likes to do include playing video games, swimming, and watching a good movie while driving. Endgame was a particularly memorable driving experience for him, as he and his wife cried very hard and their car died in the middle of the film. Prior to joining Screen Rant, Tyler worked as a horse stall assistant, lifeguard, and swim instructor, and he’s very excited to begin this new adventure that’s already so close to his heart.

Tink’s Heart: She Said… He Said Part Two | The life