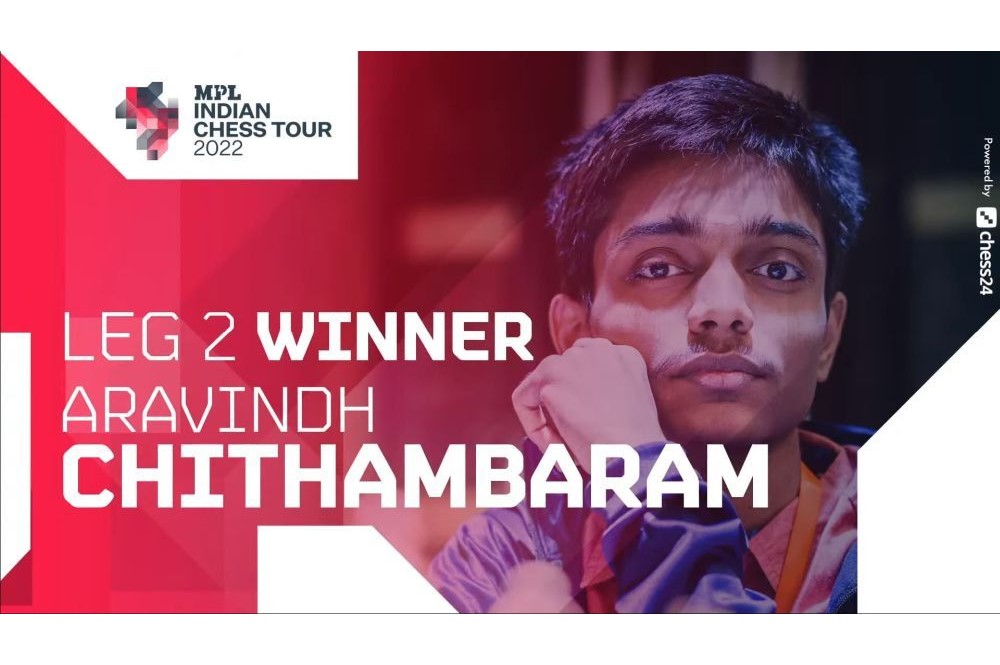 The $100,000 MPL Indian Chess Tour is a series of four 16-man all-play tournaments where the winners and top four finishers on the Tour advance to an 8-man knockout final. The winner of each event also earns a spot on the Meltwater Champions Chess Tour. Players have 15 minutes for all their moves, plus an increment of 10 seconds from the first move. There are 3 points for a win and 1 for a draw. Official site.

After an incredibly strong performance on 3rd day of competition – when he won all four of his matches – Aravindh Chithambaram took the lead in the second leg of the online tour. Two more wins and a draw on Sunday helped the 22-year-old win the tournament as he had a better tiebreaker than Nihal Sarin, who also finished with 32/42 points.

While Nihal remained undefeated, it was Aravindh who claimed ten victories, one more than his young compatriot. Aravindh actually scored 11 wins, but Gukesh’s withdrawal – due to internet connection difficulties – nullified this victory. GM Harsha Bharathakoti and FM Aradhya Garg were the only two players who managed to beat the eventual winner.

The win earned Aravindh a spot in the next Meltwater Champions Chess Tour event. He also qualified for the final of the eight-man tour, which will take place in November.

In round 13, Aravindh claimed his fifth consecutive win (out of six!) by defeating Leon Mondanca with the white pieces.

There are always two approaches to any position: either you let your opponent do what they want, or you take matters into your own hands and do what you want. In short, take control. Aravindh has done just that with 28.Nextf3!a classy gesture.

White gave up two minor pieces for a rook, but he also got three extra pawns. Moreover, black bishops are unable to unleash their true potential in this position. Aravindh won the match comfortably.