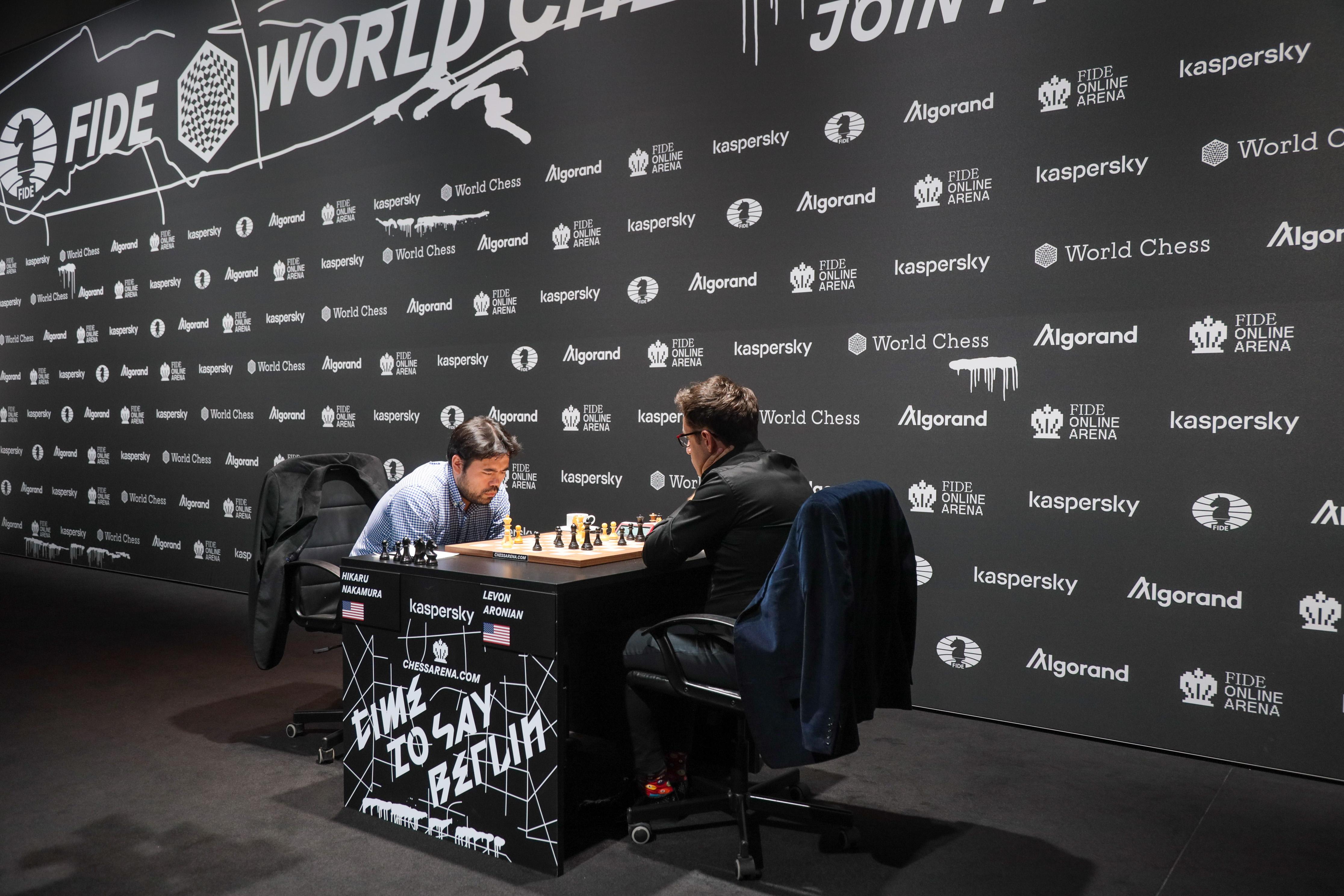 GM Hikaru Nakamura and GM Levon Aronian were involved in a memorable clash in the first match of the 2022 FIDE Grand Prix Final First leg in Berlin. Both players had the upper hand at different points in the game which ended in a perpetual tie, ingeniously found by Aronian just as Nakamura’s initiative threatened to take over.

Aronian dominated the early game as he seemed to have over-prepared his opponent even though it was Nakamura who introduced a new move in the opening. Aronian keeps the pressure on and wins a pawn with a nice streak on move 22. With his back to the wall and the clock as well, Nakamura seized the opportunity, creating counterplay and forcing his opponent to ingeniously find the draw by perpetually registering on the 54th move.

Aronian and Nakamura enjoyed a well-deserved free day before the start of the final and showed their relaxed state of mind with their own tweets. With the super-bowl taking place on Sunday in the United States, Nakamura obviously had events closer to home and of an entertaining nature in mind:

Gotta root for the Bengals especially with the set @ChidobeAwuzie and Joe Burrows’ Chess Bow!

While even just a day before such a crucial encounter, Aronian found time to comment on a current and controversial issue in the world of chess – GM Anish Giri’s Twitter account getting hacked:

The chess hack drama reminds me of an episode of Colombo. A guy thinks he did a perfect murder, pretends to help the police solve the case. Colombo said to him – This is probably the first time murderers, but we have seen hundreds of acts like this.

But the most “intriguing” tweet of the day came from world chessthe official organizer of the event, who found the opportune moment to remind the chess world of a sideline incident between Aronian and Nakamura during the 2016 Candidates Tournament in Moscow:

“He touched the king 😲” @chessqueen

Some aspects of the finalists stand out in unique ways. At 39, Aronian has been recognized by most commentators as Berlin’s best-prepared player. Most of the time, he was found well-armed in the opening stages, executing quick moves early on in almost all of his matches.

One of the best players of all time in the fastest formats in the game, Nakamura is known for his ingenuity, especially his ability to fight back when the going gets tough for him.

And these are the two elements that came out in the very first match of the final.

Aronian’s opening repertoire with Black against 1.e4 is built around 1…e5, with the Marshall Attack and Moeller/Archangelsk complex of Ruy Lopez and Petroff as mainstays of its openings. Against 1.d4, he seems to employ a much larger repertoire. When Nakamura, who has a wide repertoire with White, chose to play 1.e4 in the game, it was assumed he had a particular game plan in mind.

There are cases in high-level chess where a new move is employed by one of the players but the opponent finds the answers fairly quickly. More than home preparation, there are two types of game collections that are central to the opening preparation of a top chess professional: correspondence chess databases and chess databases. computer chess. But Nakamura’s choice seemed like a complete novelty, not featured. all over other.

In a position where 12.d4 or 12.Ne2 had been the preferred choices, Nakamura offered 12.Nh2, apparently initiating play on the kingside. But, undeterred, Aronian seemed to have his answers ready for the plan, coming up with appropriate answers quickly, and was even soon ahead of the clock. By move 17, it was apparent that Nakamura was under more pressure than Aronian, prompting GM Daniel Naroditsky to remark, “Hikaru has shown a tremendous ability to get out of high-pressure situations, but it’s starting to wear off. become a wee bit unconcerned 17 shots [and] Hikaru now goes under an hour on the clock, with Levon keeping an hour and 20 minutes – he only spent 10 minutes of thinking time [so far]. Now, if that doesn’t demonstrate supreme confidence, then I don’t know what’s happening.”

A fantastic fight erupted at move 30 when Aronian’s extra pawn seemed completely neutralized by Nakamura’s classic queen and knight combo against black’s queen and bishop. And that’s when Aronian decided to aim for glory rather than recalibrate and settle for a draw:

Of course, the game kept everyone on their toes throughout:

A remarkable aspect of the game was that, despite running out of time, Nakamura found accurate counterplay. When he was under two minutes on the clock, Nakamura had to make a crucial decision on move 39. He seemed to be suitably focused but tense, shook his head a bit, hesitated a bit with his raised hand, and ended up playing 39.f4, and later it was Aronian who had to find some imaginative moves to save the draw.

Both players were very objective during the post-match interview. When asked if he was happy to play against the closed Ruy Lopez, Aronian seemed balanced: “I’m always happy to play chess! I don’t care what opening it is. It’s a great privilege … I got a nice position after Hikaru made that wrong plan with Nh2 – Ng4.”

I’m always happy to play chess! I don’t care what opening it is. It is a great privilege.

Asked generally about his choice of opening, and if he didn’t get into the Marshall Gambit proves the variation was right for Black, Nakamura replied, “Everything is sound with computers these days! No matter what you I wanted something slow…I tried to get creative with 12.Nh2…I think Levon was better [at some point]. Somewhere in this late middle game it got very complicated when I had a pawn down, but I have this outside pawn on a5 and this pawn on b4. Potentially it gets very, very tricky…it was an interesting game.”

Everything is sound with computers these days! It doesn’t matter what you play.

When asked about his live chats, Nakamura was quite pleased with his fans and followers: “…Having all these people watching provides a lot of motivation. …Today, especially also, I just tried, a bit, to play chess. When you play chess, good things happen.”

“If I was in Los Angeles, I probably would have spent my Valentine’s Day differently” – Hikaru Nakamura#timetosayBerlin @dinabelenkayahttps://t.co/Nt0mZQkjRO