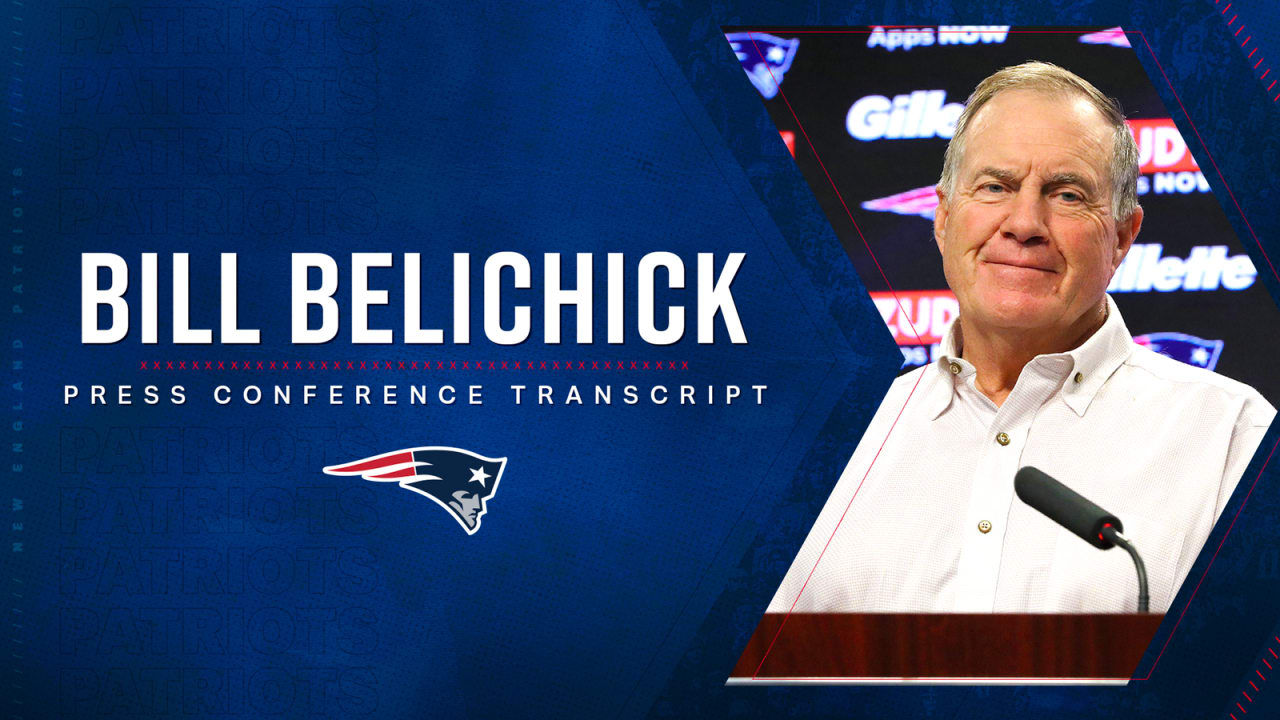 BB: I’ll just start here. Listen, guys, I apologize. I felt like I was a little short with you after the game. Obviously a frustrating game. Down 20-0, we didn’t do anything good enough. There isn’t much to say at this point without watching the movie. Obviously we had problems in all areas. There was no simple answer. Every room could have been better. Every area of â€‹â€‹coaching could have been better. Every area of â€‹â€‹play could have been better. All of this would have helped. I wasn’t really trying to be brief, but honestly there wasn’t much to say. I don’t know there is much more to say now, but it’s not your fault. It was a frustrating game.

On the kick-off after the Patriots touchdown at the end of 4*e * trimester:

BB: It was poorly executed on our part. It was not at all what we were looking for. Either you pin them and play extra yards of field position, attack them on the 20 and gain five yards of field position, we need a field goal, or you hit it and keep the extra seconds at the meter. We have neither. We didn’t get the position on the pitch and we lost five seconds, which at the end of the game is another game. Like a lot of things in the game, it was bad practice, bad play. , poor execution. Not good enough

If he is concerned about the safety of the players after the injuries of Nelson Agholor and N’Keal Harry:

BB: Talk to the officials.

On how the weather during their game in Buffalo is helping prepare for the Bills this week:

BB: Sure, it affected the game. It’s still valuable. This is the team we play two weeks ago. It affected the strategy in the kicking game. It affected some strategy in the passing game. I don’t know if this affected the matches of the racing game a lot. Probably not. Like every game, it will be a totally different game. We’ll get ready and see how it goes. I’m sure they will do some things differently. Whatever the weather conditions, they would make some changes. I am sure we would make changes. Both teams have an element of a game plan in their style of play anyway. We’ll see how it goes.

If the loss to the Colts will help move forward:

BB: I don’t know. We will see. We’ll see what happens this week. We usually don’t focus too much on what happened in the previous week, whether it was good or bad. After going through it and correcting it, talk about it, focus on the game ahead and try to prepare for it as best you can. I don’t think living in the past and worrying about last week’s game all week and all the psychological effects and a whole bunch of other garbage, I don’t think that has anything to do with it. see with the Buffalo game. Either we’re going to prepare well, perform well, execute the game well and make good decisions, coaches, players and all that, or we don’t. I don’t really know what last week, two weeks ago or a 2006 game had to do with it. I don’t think all of this has much bearing on that. It shouldn’t. Maybe the team is not ready to handle this. I don’t think it should. I don’t know why this should.

If he thinks the Patriots have lost the same hungry frame of mind they had at 2-4:

BB: I don’t know. Hopefully we have a good week of focus, training and execution and continue that until Sunday. We will see. I do not know.

BB: We have talked about these situations. We talk about it every year. We talk about it several times during the year. When I see what happened, I don’t know how anyone will see it. What I think doesn’t really matter anyway. We will go through it. Based on the rule, I can’t see why TY Hilton wasn’t kicked out. He pushed an official. It was pretty clear, but it wasn’t called at all. This is a clear ejection for me. The Dugger game, [Michael] Pittman comes in from behind, Kyle turns around, there is a trade, and his helmet is off. He was trying to put on his helmet as he approached Kyle at the end of the play, so he approached quite quickly. I don’t know if Kyle dropped him or if he would have come loose anyway. In the end, both players were kicked out. I would say I understand that. Whether I agree or not, that’s a whole different debate. I don’t understand why TY Hilton was not kicked out for contacting a manager. Intentionally or not, this has no effect on the room. These parts are revisable and are overhauled, so I don’t understand this one. You should talk to the officials about it. They are the ones who made the call.

On how the Patriots will handle Covid protocols this week:

BB: I would say every day is a new day. I don’t think any of us know what to expect. We are following the league rules and protocols, which have been significantly improved or more restrictive, which I think we all understand, but I think we need to make adjustments and comply with them. We put up a wall in our weight room over the weekend and things like that to be in compliance like we did last year. What this week will bring, I don’t know. Again, I don’t really have a say on this, but we’ll continue to do our best to keep everyone as safe, distanced, masked and protected as possible. It is certainly an imperfect situation on several levels. Whatever we do, I think we are doing our best. We are doing all we can. It’s not perfect. Will it be good enough? Will it be good? We will see. Every day you sort of walk in here and if our doctors would come over one day and say we have 20 positive people, I don’t think any of us would be surprised. It’s nice to hear that we don’t have any positive results or that we don’t have any symptoms. Those are fine words to hear, but I don’t think it would surprise any of us. We have already seen five, six, seven teams, whatever they are, having a big problem in their team, between the staff and the players or both. Who’s next? I do not know. Maybe no one. It wouldn’t surprise me if it was someone.

Whether the Patriots will be mostly virtual this week:

BB: The league rules are out, so we’ll take a look at them today. I would expect some sort of direction, today or tomorrow, on what it will be this week. We will have to do with the league.

On his decision to hit a basket on two possessions with nine minutes left in the Colts game:

BB: I thought it was the best thing for the team at the time.

On what made the decision to kick the basket in the 4*e * quarterback the “best thing for the team at this point”:

BB: It’s still a two-player game and now it’s a field goal. I thought we had enough time left to have enough possessions to be able to score 10 points, which we could probably have. It would have been the case, was it a 4th and a goal on the 7th? Is that what it would have been? I didn’t feel very good about converting the 4th and the goal of the 7. If there had been less time and there had been a situation where you would go for that or I would for the 4th and the goal on the 7th, absolutely. I didn’t think that in this match situation it would have been the best decision. I thought it would have passed three runs and it would have taken two touchdowns. At the end of the game, especially in the dome, having a chance to score a basket over 50 yards, I think that’s a much better chance than scoring a touchdown and having a six point differential per. opposed to a three-point differential, versus the odds of converting a 4th and a 7. At one point, I certainly would have kept the offensive on the pitch in the 4th and 7th with less time or no time out. You can certainly take this scenario a step further, then you get into the gray area of â€‹â€‹which one would you be if there was less time, less wait times, whatever.

On how Mac Jones handled his 20 point drop:

BB: For me, until the very end of the game, it’s really not about the score. It is about running the game that is called and trying to perform good games. You are not going to score 17 points in one trip. You’re not going to score 17 points in just one game. Personally, I don’t see what that has to do with it. Now, if there is a point where the score, the time remaining, the number of possessions remaining, and all that, then that dictates the strategy. We have been in games where we have fallen behind. They scored 17 points in the first half. I didn’t feel like we were unable to score 17 points in the second half. Whether it’s up 10 or down 17, it’s about going out there and having good plays, making good decisions as a coach, calling good plays, playing good games one game at a time and trying to bring the game down to a competitive game level. Until the game reaches the point where strategy now becomes paramount, which I didn’t think was like that at all at half-time, so what difference does that make?

On what he considers his best game plan:

BB: I appreciate the question, but like I’ve said many times, going back to when I was a coordinator, so it would start in ’79, the special teams with the Giants, whatever success we have â€ I had in the kicking game as a coordinator, in the defense as the coordinator, as the head coach, it’s because the players went out there and made the plays for help us win the game. You can X-and-O whatever you want, but in the end players win matches. Players make games to win games. Without good players and without good players making good plays, there are not many games to be won. Whatever strategy, game plans or games we use, whatever they are in any game, at the end of the day it all depends on the players, their execution, their decision-making and the fundamentals of these games. This is really where the merit of these games goes and should go because they are the ones who make it. I’ve been very, very lucky throughout my career to coach a lot of good players, great players, some of the greatest players in the history of the game, a lot of very, very good players, great actors and players who complemented each other. Whatever games we won, whatever success we had, it was the result of these players and their fundamentals, their decision making and their overall level of execution, awareness and , in some cases, communication. In many cases, communication due to teamwork and the involvement of several players on successful plays. It’s not a guy doing it. It must be a blocking an entire offensive line, a defensive front seven stopping the run, a cover and a passing run working together, or a blocking on a punt return, at any rate. This is my view of the world on it. Thanks for asking.

Zavarovalnica Triglav dd: The future of the world rests on its young people (hopes)