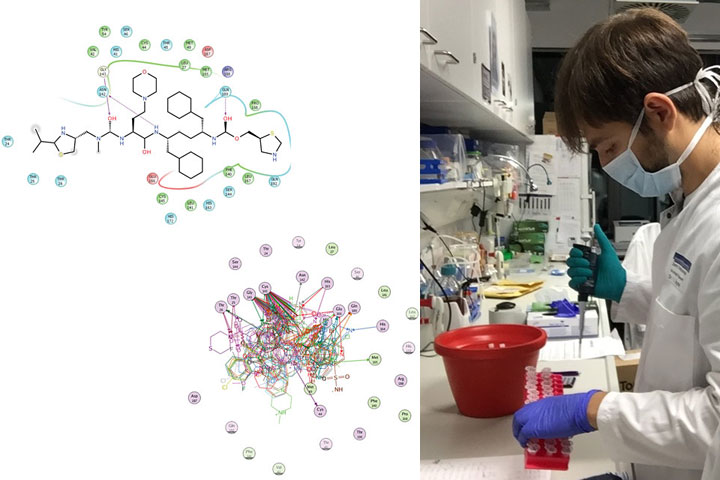 He was born in Albania (Tirana) in 1986. His parents moved to Italy when he was six and he became an Italian citizen in 2007.

Luca was awarded the title in October 2018, the 14th Italian player to win the GM title.

In the scientific field, Luca holds a master’s degree in genetics and molecular biology (from the “La Sapienza” University of Rome). He obtained a doctorate in “Medical Microbiology, Immunology and Infectious Diseases”, working on an HIV cure project under the supervision of Andrea Savarino. Later, he carried out his research at the Italian Institute of Health in Rome and at the University of Heidelberg in Germany. He is currently visiting professor at the Federal University of Sao Paulo in Brazil.

When I showed Luca the click-bait title of my article, he asked me if I knew about Betteridge’s law, which states that “any title that ends with a question mark can be answered with the word no”. I really hope that’s not the case here. I urged Luca to abandon his attempts to rearrange the small pieces of wood on a checkerboard a bit better than the others and focus on the most pressing global tasks that need to be solved.

Luca and his team worked on cobicistat, a drug used in the treatment of HIV/AIDS, showing that it could have an effect against COVID-19. This is the result of a study, so far conducted only in vitro and on an animal model, published in the journal of the American Society of Microbiology, mBio.

The international team of authors has proven that Cobicistat inhibits the replication of SARS-CoV-2 with a different mechanism than currently used drugs, i.e. by blocking the fusion of the virus to its target cells. Additionally, the drug may attenuate disease progression in a hamster (Mesocricetus auratus) animal model, by enhancing the effect of another drug previously tested against COVID, namely Remdesivir.

If you are interested in the details of the research, the article on COVID is now published and free to read:

Currently, there are limited treatment options for severe acute respiratory syndrome coronavirus 2 (SARS-CoV-2), and testing of a number of treatment regimens has led to conflicting results.

Here we show that cobicistat, which is an FDA-approved drug booster that blocks the activity of cytochrome P450-3As (CYP3As) and P-glycoprotein (P-gp), inhibits the replication of SARS-CoV- 2. Two independent cell-to-cell membrane fusion assays demonstrated that the antiviral effect of cobicistat is mediated through inhibition of spike protein-mediated membrane fusion. In line with this, incubation with low micromolar concentrations of cobicistat decreased viral replication in three different cell lines, including cells of pulmonary and intestinal origin.

When cobicistat was used in combination with remdesivir, a synergistic effect on inhibition of viral replication was observed in cell lines and in a human colon primary organoid. This was consistent with the effects of cobicistat on two of its known targets, CYP3A4 and P-gp, the silencing of which stimulated the in vitro antiviral activity of remdesivir in the manner of cobicistat.

When administered in vivo to Syrian hamsters at high doses, cobicistat decreases viral load and attenuates clinical progression. These data highlight cobicistat as a therapeutic candidate for the treatment of SARS-CoV-2 infection and as a potential building block of combination therapies for COVID-19.