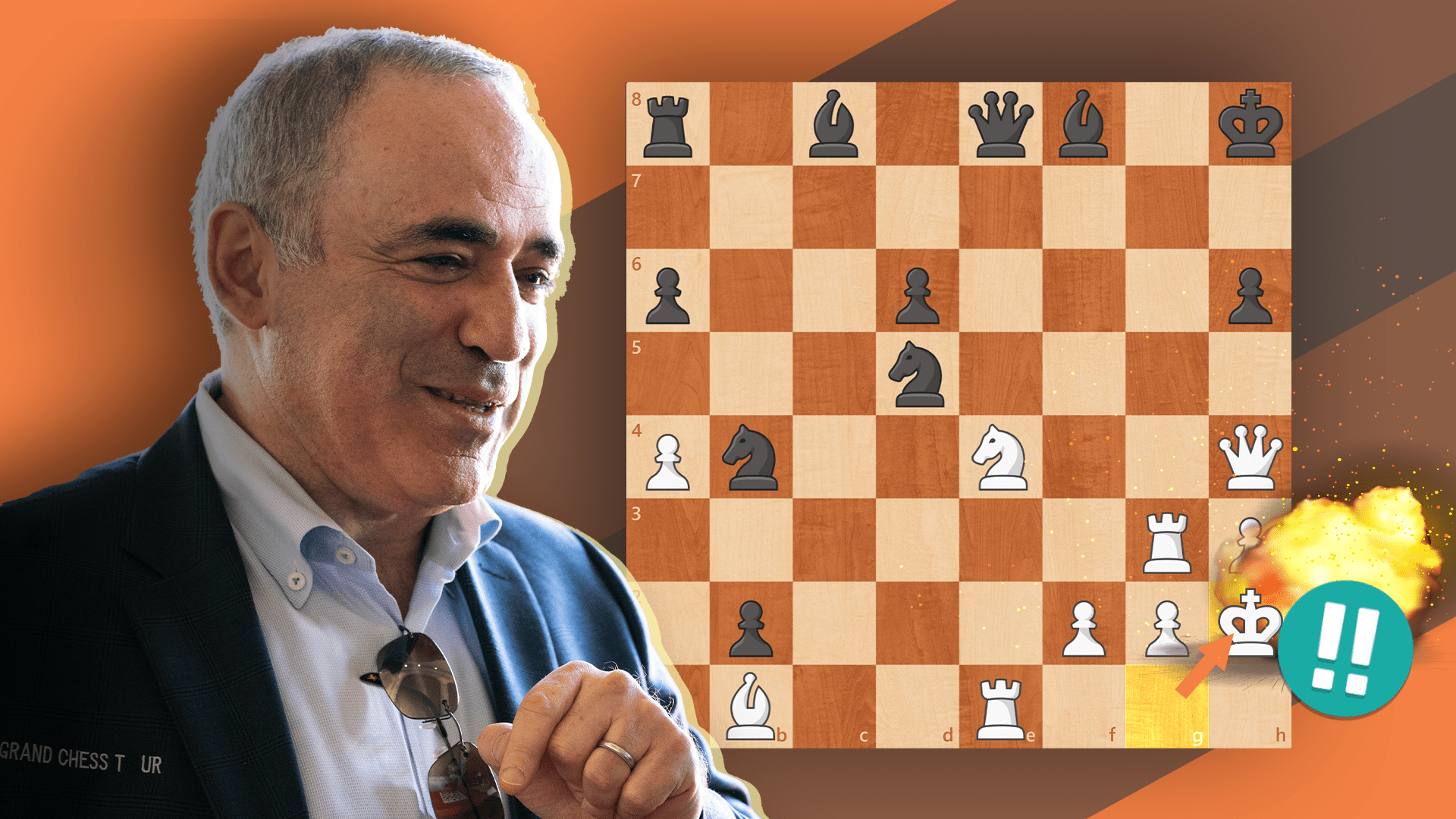 Waiting moves are among the hardest to spot in chess because, by definition, they don’t seem to have an immediate purpose. They do not openly change the position in any way, and moreover, they pass the move to the opponent. That’s actually the goal in any case: to force the commitment of the other player you are ready to meet.

I tried to target all levels of chess players with the examples in each category, logically starting with classic or known examples and ending with games played in recent years. I hope even titled players can learn something here or use it as reference material. I have divided the broad and somewhat elusive subject of “waiting movements” into the following categories:

One of the few ways to win a game of chess is to get zugzwang. Of course, the zugzwang is the magic moment when your waiting move knocks the opponent down on their own sword. Any move is a loser for them and unless they quit they are forced to throw in their pieces one by one or wait for the inexorable end.

The most basic example of such a waiting move can be seen in king and pawn endgames. By using waiting moves, the winning side gains opposition or an entry into the opponent’s position, thereby gaining material or decisively supporting a passed pawn. There are certainly some easy examples to choose from, but I decided to challenge our readers with an example from the famous IM Mark Dvoretsky by Dvoretsky Endgame Manual.

Black to move and win.

A more sophisticated example, in that it contains more pieces on the board than just pawns and kings, is the game between GM Bobby Fischer and GM Mark Taimanov in the 1971 Candidates quarter-final. such a classic example, often the go-to game to teach the bishop’s ability to outsmart a knight using the zugzwang. Watch out for the white bishop’s sneaky waiting moves, eventually leading to a zugzwang for the opponent and culminating in an unforgettable sacrifice.

A modern example is a fine game by world champion Magnus Carlsen at the FIDE World Cup in 2021 where his opponent, GM Vladimir Fedoseev, was left with no moves despite numerous pieces, including queens, in a middle game on the chessboard:

Prophylaxis (think: prophet) refers to moves that protect one’s own position before any immediate, offensive action is taken. Often, on the side of positional superiority, certain waiting moves must be made to maintain the safety of our own king before causing damage to the other. The following game is widely known, but an old one is always a goodie. GM Garry Kasparov’s prophylactic king move, exemplifying his keen sense of king security, takes care of his own before unleashing a tsunami on his opponent’s king.

The next, more modern game between GM Nodirbek Abdusattorov and GM Grigoriy Oparin features the same prophylactic Kh2. Yes, it’s the only blitz game included in the article, but the next moment is instructive and shows how playing a preemptive Kh2 can set up a lethal attack.

With the advent of computers, the adventures of the 70s and 80s seem to be over in some respects. It feels like the opening doesn’t hold much mystery anymore as the best chess players in the world seem to be sitting in front of the computer all day memorizing all the variations.

However, even this point has been proven wrong time and time again – a recent example is the game GM Sam Shankland against GM Sergey Karjakin in Tata Steel Chess Masters 2022, where the Russian stumbled into a “well-known” line and had to quit at move 26. So much for all that memorization, huh?

Nevertheless, a popular approach at the highest level is to use waiting moves to circumvent a well-known theory. Through “little movements”, as you see below, they introduce subtle differences from the lines already known, but these little movements certainly have venom.

The first example is taken from GM Alex Yermolinsky’s book, The way to chess improvement: 11.h3!? in a Carlsbad structure, from the Queen’s Gambit Declined. In short, this little waiting move waits for Black’s response and helps White determine the optimal setup accordingly.

Twenty years later, we are still playing it. Here is a game GM Nodirbek Abdusattorov played in last week. The following example is chosen because it introduces an idea not mentioned in Yermolinsky’s book, published in 1999 (the idea: 14.g4). Also, although not the first example of this 14.g4 line, GM Peter Leko is the strongest player to use it against the much younger GM Alexey Sarana.

Another fine example of a waiting move in the opening is 12.Kh1 in the Graf variation of the Ruy Lopez. While several other moves have been tried with varying success, this small side step is the highest scorer, despite not having as many plays as the other moves. The point, as in the previous example, is that White waits to see what Black’s setup will be before committing to action in the center; namely, he waits to see what Black does with the bishop on c8 and the knight on d7. Although the following match was a draw, former World Champion Vladimir Kramnik’s play brought former FIDE World Champion GM Ruslan Ponomariov under fire and demonstrated the danger of this deceptive and unsuspecting kingshot. .

Waiting in order to push an opponent to go too far has much less to do with objective evaluation than with psychology. The following examples show how the simple act of waiting can cause the other party to make a horrible mistake.

Now who could be a stronger challenger than the English GM Tony Miles, who sadly beat reigning world champion Anatoly Karpov in 1980 with the superb 1…a6.

Okay, now that we’ve introduced Miles with this little move, let’s show an even nicer and more complex move he played in 1989, the mysterious 18…Rac8!?. I had a hard time figuring this out on my own and used This article by FM Niranjan Naval Gund to understand this amazing turn movement and to write the annotations.

At the time of writing this article, it is hard to avoid including this recent example of GM Richard Report against GM Dmitry Andreykin during the 2022 FIDE Grand Prix Final in Belgrade. With two minutes on the clock against eight, Rapport declines a triple repetition simply to continue the game 30.Qe5!!, which in itself does not change the position objectively, and causes his opponent, who was probably expecting a draw, to make a mistake almost immediately.

This extraordinary waiting move rewarded Rapport with a tournament victory and, with it, a place in the Candidates Tournament. FM Carsten Hansen has already provided some great annotations to the game, so I’m including them below, taken from this article:

Preparing for a veiled attack

Sometimes the purpose of a waiting move is to prepare for an unexpected attack, to conceal one’s intentions. While this next example may be controversial because Fischer’s 14…Kh8 has the very practical idea of ​​clearing the g8 square for the rook, I still include it to expose students of the game to such an original and , when you first see it, shocking shot. I select this game in particular because it is less well known than Fischer’s victory over GM Anderssen with the same diet:

The following game is a much more sophisticated example of the same concept. This one is a truer waiting move, however, because 12.Kh1 doesn’t just prepare the idea for g4. It’s more flexible; he needs time to improve his position in the center before committing to the same idea as Fischer with 16.g4.

Earn waiting moves from my own games

I’ve included this section to show how these ideas can be applied to club-level chess games. While obviously not as impressive as anything by world-class grandmasters, I think the following examples, played before I even reached national master level in the United States, show that Ordinary human beings are also capable of waiting their way to victory. .

In the following example, from a position of absolute dominance, my waiting move left white powerless without any moves.

The next game was important for me. After slaughtering a midgame advantage, I desperately managed to get an even-turns endgame with an extra pawn, but my opponent defended well and reached that theoretically nil endgame. I didn’t give up and in the end waiting with f3 before pressing f4 was the idea that won me the game; and with a victory in the next game, I won a prize money in the tournament.

I’d like to thank several people at Chess.com and beyond for helping me find and explain many of the examples you liked above: GM Robert Hess, IM Erik Kislik, FM Niranjan Navalgund, Dylan Rittman and others. I hope this article helps you expand your arsenal of position ideas and you may not be able to Wait to use these ideas in your future games!

Could the mystery of Ben Simmons’ return give the Nets a competitive advantage?