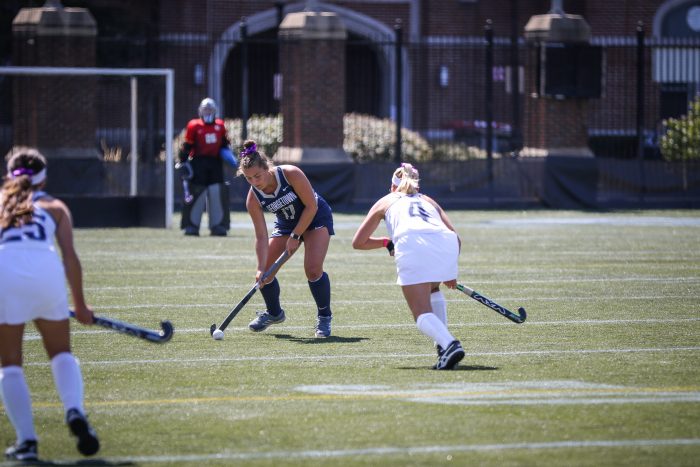 On Friday afternoon at Cooper Field, Georgetown University field hockey (9-8, 3-4 Big East) beat Big East rival Villanova (6-12, 1-5 Big East) by a score 2-1 in regulation time. Prior to the game, Georgetown had the opportunity to sneak into the Big East tournament, as the fourth and final seed, with a win over Villanova and a win over UConn against Temple. Unfortunately, Temple took down UConn, putting an end to Georgetown’s playoff hopes. However, if Georgetown can beat Richmond in their final game on Sunday, that would only mark the second winning season in program history.

The match started in constant rain which continued throughout the match. Despite the weather conditions, Villanova came out strong and dominated possession time during the first ten minutes. The ball still seemed to be on Villanova’s side, which ultimately led to Villanova being awarded the first penalty corner of the game. Georgetown’s defense was solid, behind the leadership of senior center-back Sydney Stephenson cleared the ball out of the circle before Villanova could even attempt a shot.

Georgetown’s defense continuously intercepted passes and stopped Villanova’s touchdowns. With 5 minutes left in the first quarter, Georgetown freshman midfielder Emma Van Der Veen threw a solid counterattack into the circle and secured a corner kick after the Villanova defender failed to allow five yards. space after an initial foul. It was Georgetown’s first corner kick of the day, which came later than usual, as Georgetown led the Big East in allocated corners per game this season. Graduated midfielder Ali Cronin sent the ball to Stephenson who unleashed a clean shot but missed the goal right next to it.

The first quarter ended with just one corner for both teams. Despite Villanova dominating early in possession, Georgetown started keeping the ball in his zone with greater success in the closing minutes of the quarter.

The second quarter started with an immediate rush to Villanova and a cross inside the circle that led to a missed shot to the right. Senior goalie Ciara Weets apparently had the net covered, but nonetheless, it was the best opportunity to score so far. The defensive battle continued into the second quarter as Georgetown tried to build up some chances at the net. An opportunity presented itself when sophomore Vivienne Trumpbour intercepted a pass and ran down the sideline eventually pushing a pass to the far post where graduate forward Emma Street almost found the back of the cage. Villanova then stopped Georgetown’s second turn of the day by intercepting a pass inside the circle and clearing the ball to safety.

Georgetown’s displayed early second quarter possession was almost wasted when Villanova’s Amanda Middleman received an out pass in front of all Georgetown defenders and went head-to-head with Weets. Weets, who leads the Big East in save percentage, continued his excellence with a slipping save to keep the score tied at zero. The defensive battle in the rain continued until halftime, with the two teams still not finding the back of the net.

Georgetown, feeling the pressure of the game to win, came out hot in the third quarter, immediately earning a penalty corner in under a minute. After the initial pass inside the circle was deflected, the ball found Street who managed to pass Trumpbour through the circle. His shot finally found the back of the cage, giving Georgetown a 1-0 lead.

After a quick offensive start to the quarter, the third quarter continued on the theme of an offensive fight. The most important play of the third quarter came when Weets was tasked with making another on a single save, which she managed to push back and clear, ending Villanova’s chances to score.

As the game reached the fourth quarter, the rain started to intensify and with that the Georgetown offense. A repelled counterattack from an intercepted ball from Villanova’s side of the pitch led to first-year midfielder Sophie Towne pushing the ball into midfield with only the goalkeeper in front of her. A collision between Towne and Villanova goaltender Jordan McGinley resulted in officials awarding Georgetown a penalty stroke. Towne had the opportunity to give Georgetown a bit of a breather and took advantage of passing the ball past McGinley’s dive attempt to solidify Georgetown’s 2-0 lead with 6:33 left.

With immediate pressure from the Hoyas, Villanova’s desperate attempts to make it a competitive game put pressure on the Georgetown defense. Just 2 minutes after Towne’s goal, Villanova pushed a long out pass to Meghan Mitchell who was left with no one in front of her except Weets. Weets, who had already spoiled Villanova’s two breakaway attempts, finally allowed his first goal of the game and, just like that, Villanova was back at one point.

After three minutes where both teams struggled to hold the ball, Georgetown finally made a run into the circle when senior midfielder Halle Gill kicked the ball away with a defender’s foot and gave Georgetown their fourth. corner of the day. The opportunity to finally put the game out of reach was cut short when Cronin’s shot was blocked by Villanova’s defense. Villanova, eager to make a last-minute comeback, attempted to pass the ball onto the pitch and score a penalty corner to stop the clock. However, Georgetown’s defense remained balanced and held their own to fight the immediate threat and watch the time run out, giving Georgetown their ninth win of the season.

Despite an exciting ending to Georgetown’s last Big East Matchup, the unfortunate result of the Temple-UConn game ended their playoff hopes. Sunday will be Georgetown’s last game of the 2021 season, where the team will honor their seniors, when they face Richmond at 12:00 p.m. at Cooper Field. To follow @GUVoiceSports on Twitter for more updates and coverage of all fall sports in Georgetown.