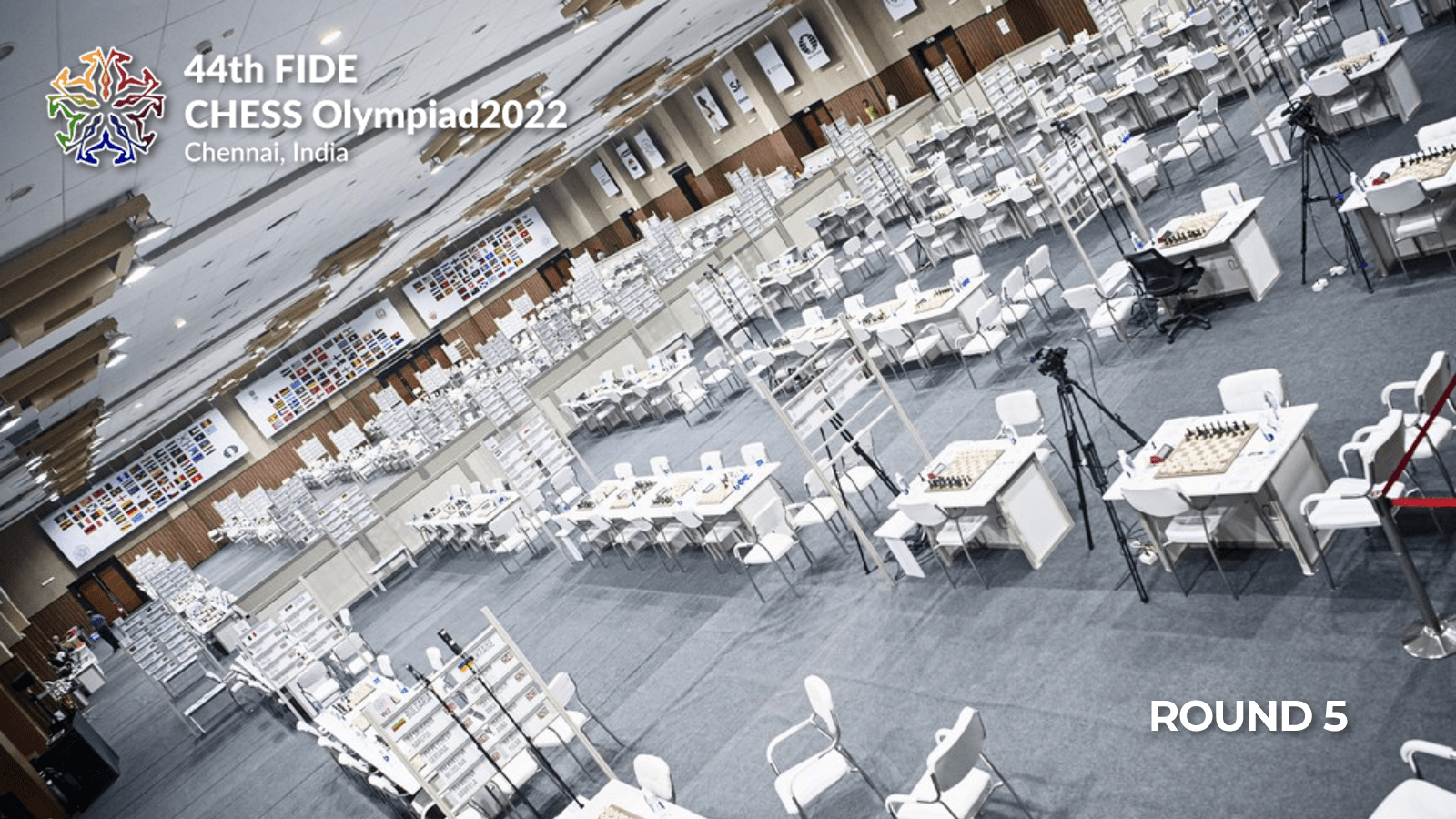 11th-seeded India 2 picked up an upset victory over fourth-seeded Spain, while 12th-seeded Armenia beat 10th-seeded England, both with an identical score of 2.5-1.5, to jointly lead the open section with 10 match points at the end of the fifth round of the 44th FIDE Chess Olympiad. Young GM Dommaraju Gukesh defeated legendary GM Alexei Shirov on the top board of India 2 which will be covered as the standout game of the day.

In other upsets of the day, 32nd-seeded Cuba shocked sixth-seeded Azerbaijan while the Philippines prevailed over Sweden, both with an identical score of 2.5-1 .5 again. Uzbekistan, Cuba, India, Iran and the United States follow the leaders with nine match points.

India prevailed over France with a score of 2.5-1.5, Georgia beat India 2 with 3-1 and 20th-seeded Romania beat fourth-seeded Poland series, with 2.5-1.5 to become the leaders of the 44th FIDE Women’s Chess Olympiad. Azerbaijan held Ukraine to a 2-2 draw, joined in second place by Kazakhstan, who beat Cuba 3-1, all on nine match points.

USA’s MI Carissa Yip (2416) was beaten by WFM Paula Elizab Paredes Bustamante (2162) with the black pieces in 31st-seeded Peru’s surprise victory over the seventh-seeded USA with a score 2.5-1.5, while Colombia held Spain to a 2-2 draw. The United States now remain tied for places 29-74 with six match points.

Personalities of the Olympiad

The gaming arena is not only filled with professional chess players and grandmasters. It also consists of a large number of chess enthusiasts, budding young players and visitors for whom the event is a biannual spectacle. Without forgetting the referees, officials and other contributors. It is an event where you visit a new place in any part of the globe different from your own, enjoy the hospitality, the cuisine, rekindle old friendships and create new ones. Dress, speak and express yourself as is customary in your own culture. But the time comes, the chessboard remains a serious place where you give the maximum, at your modest level.

As mentioned yesterday, India 2 remains the crowd favorite, and they also justify the expectations today. Discussing the young team on Chess.com’s live commentary, GM Arturs Neiksans boldly stated: “[I am] not really sure if india 1 is really stronger than india 2 because [India 2] are such an impressive range. I would like the young people to succeed!” GM Yasser Seirawan haughtily declared: “The future belongs to them!”

The future belongs to them!
—GM Yasser Seirawan

While three of India’s main team players (GMs Pentala Harikrishna, Vidit Gujrathi and Erigasi Arjun) are rated higher than the other India 2 team members, Gukesh, GM Nihal Sarin and GM Rameshbabu Praggnanandhaa have made gains of Considerable scoring since the teams were announced, selected based on average player ratings between the scoring lists from March to May 2022 – the criteria on which Indian teams are typically selected to represent the country. The average age of the Indian main team is around 29 years old while that of the Indian team 2 is 19 years old.

India 2 was helped by Gukesh’s smooth victory over Shirov, which is annotated as the game of the day:

Speaking to the press later, Gukesh confessed that 19…b5 was the pivotal moment of the game’s provocation, while he was sure Shirov was likely to take the bait and attempt d3-d4 later, which he saw fit for The Black. The victory also allowed Gukesh to maintain a clear score of 5/5 so far in the tournament, a feat he shares with another young prodigy: GM Nodirbek Abdusattorov of Uzbekistan.

Armenia joined India 2 in the lead, mainly thanks to the only decisive game of their game against England, when GM Hrant Melkumyan took advantage of a tactical error by GM Luke McShane:

American GM Leinier Dominguez scored a crucial victory by beating Israeli GM Maxim Rodshtein with a fine exchange sacrifice. This victory allowed the United States to beat Israel 2.5-1.5, with all other boards ending in draws:

The encounter had a dramatic moment, as Dominguez’ clock stopped at the 40th move with just seconds to go. Seirawan and Neiksans were visibly nervous at the Chess.com comment and started a countdown of seconds remaining with 6-5-4-3-2—at which point Dominguez thought calmly and played 40.Qxa4 with only two seconds to play. the clock! Seirawan later exclaimed, “Those two seconds were killers!”

After the first two tables ended their matches with draws, India prevailed over France thanks to IM Tania Sachdev, who turned out to be the crucial points scorer for the team, just like she did in the previous round:

India’s margin of victory could have been bigger had IM Vaishali R converted a clear advantage into victory:

The architect of the Romanian victory was WGM Mihaela Sandu, who played a fine attacking game to claim an upset victory over the much higher rated GM Monica Socko of Poland, a crucial victory for her team: