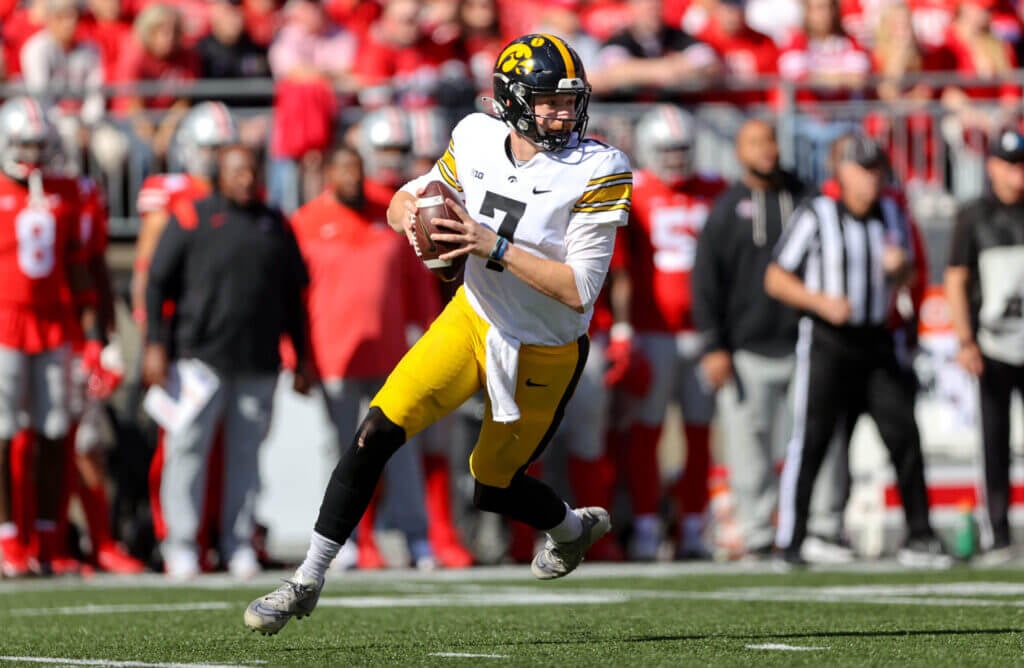 IOWA CITY, Iowa — True or false, the Iowa quarterback’s stability has not only been a hallmark of the program for more than a decade, it’s also been beyond luck.

Only once in a span of 148 games, from the 2009 bowl game through Week 9 in 2021, have the Hawkeyes lost their starting quarterback to injury. This took place in 2014 when CJ Beathard replaced Jake Rudock. Additionally, there were no performance-based quarterback changes during this period.

Spencer Petras’ right shoulder injury last year broke that streak, and Alex Padilla has started Iowa’s last three games. Petras replaced Padilla in the season finale and then opened the Big Ten Championship game but came out with major internal bruising. Padilla ended that loss, and it left the coaching staff in a dilemma going into the Citrus Bowl. The starter wasn’t revealed until after kickoff, and it was Petras.

Seven games into this season, Petras started every game, but was benched at halftime at Ohio State. For the first time since 2008, Iowa could change starting quarterbacks strictly based on performance. Both Petras and Padilla took the first-team representatives for two days of practice and will continue to rotate during Wednesday’s practice before the coaching staff selects a starter for Iowa’s game on Saturday against Northwestern.

“We haven’t made a decision yet,” head coach Kirk Ferentz said. “(Tuesday) and (Wednesday) are big working days for us. We won’t do anything until then. We’ll see how we feel coming off the pitch and maybe bring it back to Friday.

Only twice in the past 20 years has Iowa faced quarterback competition bordering on controversy. In 2014, the team appeared to be split between Rudock and Beathard, and the two played multiple series in a disastrous 45-28 loss to Tennessee in the TaxSlayer Bowl. Rather than expand the situation into an off-season competition, Ferentz picked Beathard as his 2015 starter a week after what is locally known as the “HawkSlayer” Bowl. Rudock transferred to Michigan after the spring semester.

The current situation somewhat mirrors the 2008 battle between Jake Christensen and Ricky Stanzi. Christensen started every game in 2007 but completed 53% of his passes in 6-6 years. He and Stanzi alternated starting in 2008 and even quarterbacking through Iowa’s first four games before Ferentz picked Stanzi as his No. 1 quarterback. It worked as Stanzi won three bowl games from 2008 to 2010 and led the Hawkeyes to a 7th overall finish in 2009.

The 2008 team had an elite running game featuring Doak Walker Award-winning Shonn Greene so the offense could afford some growing pains at quarterback. The current team is 3-4 overall, averaging 14 points per game and a national record 227.3 yards per game. He needs a spark somewhere.

“We don’t anticipate a rotation at this point,” Ferentz said. “But anything is possible. I’m not going to rule it out. But preferably (we) wouldn’t want to do that. And whoever starts, hopefully, isn’t looking over their shoulder. We also need to push the offense forward and show some production as well. So hopefully whoever’s in there can help us do that. This is the goal of the team.

“And there’s I guess a balancing act that goes with it because you don’t want to make a decision based on a game. Something like that. We’ll sort of see. Make a decision and roll with it a little.

Petras and Padilla received a similar number of first-team snaps. Center Logan Jones said he couldn’t tell which player was behind him until he heard the quarterback’s voice. Receivers caught passes from both quarterbacks.

“It’s been kind of a rotation,” receiver Arland Bruce IV said. “It’s a little hard to say. They even get reps.

Petras, a senior, has 26 career starts and has thrown for 4,463 yards, 21 touchdowns and 19 interceptions and completed 56.2% of his passes. Last year, Padilla passed for 636 yards, two touchdowns and two interceptions with a 49.1 completion percentage. Against Ohio State, Petras completed 6 of 14 passes for 49 yards and two interceptions, including a pick of six, and a lost fumble in the first half. Padilla, a junior, replaced Petras in the third quarter and failed to secure the opening snap. He completed 5 of 10 passes for 32 yards and an interception.

Ferentz said he won’t use any type of training metrics or statistics to determine a starter this week.

“I think we’ll just see how it feels,” he said. “There probably won’t be a concrete formula or a scientific formula. Again, it will just be how we all feel coming off the pitch, whether it’s (Wednesday) or whether it’s Friday, and then we’ll make a decision.

With a three-game losing streak and a stat sheet filled with offensive issues, the mental side took a similar toll to the physical deficit of Iowa’s players.

Bruce said, “I’m not going to lie, it’s often difficult” to stay positive during certain games. In addition to being discouraged, offensive players sometimes look at their other teammates and feel guilty.

“We see the defense kicking ass for us,” Bruce said. “We have to look at these guys and hold ourselves accountable. Like, are we really doing everything we can to really help these guys? Because I know it’s frustrating for them. I sometimes feel for these guys too, because they do everything they can. I mean, when we give the ball to the offense (of the other team) on the 30, 35-yard line, and they still hold them back towards a basket.

Linebacker Jack Campbell has no interest in rhetoric that could divide the team. His message is about personal responsibility.

“I’m not going to let my teammates down and say maybe in a situation where I let my teammates down, I’m going to do everything in my power to make sure it doesn’t happen again,” Campbell said. “I feel like that’s the mindset we have right now. So, I mean, I have sympathy for them. I’m going to pat them on the back. But at the same time, they’re grown men and they’re ready to go. In the end, we just have to do our job.

That sense of responsibility has permeated Iowa’s practices with offensive players taking turns for offside calls, making sure jerseys are tucked in, and chasing each other for any kind of slouch.

“A lot of storytelling out there, our team, we should give up and the world is ending,” Bruce said. “We still have five chances to go out there and prove ourselves. And that’s a lot of games and a lot of chances to really end on a high note.

The Hawkeyes (3-4, 1-3 Big Ten) enter this game with Northwestern as a seventh-time double-digit favorite in a Ferentz vs. Pat Fitzgerald battle dating back to the 2006 season. The first six times, no only Northwestern covered, but he also won. It wasn’t until last year that Iowa prevailed with such a big gap, but they failed to cover in a 17-12 win. If that game had lasted another quarter, it probably would have ended in another loss.

Some of the defeats were among the most crushing of Ferentz’s tenure. In 2009, the 9-0 Hawkeyes led 10-0 in the first quarter. Then Stanzi rolled straight into the end zone, got his leg bent by North West defensive end Corey Wootton and fumbled. The Wildcats recovered for a touchdown and Stanzi sat out the rest of the regular season with a sprained ankle. The Northwest upset Iowa 17-10.

The following year, the Big Ten-leading Hawkeyes led 17-7 with 10 minutes left before Northwestern quarterback Dan Persa rallied the Wildcats with two touchdowns to score another upset. Persa tore his Achilles tendon on the game-winning 20-yard touchdown pass with 1:22 to go. It was the third straight year the Wildcats beat Iowa after trailing in double digits.

“If he were to get injured, I wish it had happened sooner,” Ferentz said. “I don’t want anyone getting hurt – don’t get me wrong – but you understand.

“I mean what a room it was. And those things stay with you.

“Coach was just telling us because of their record, we can’t take them lightly,” Bruce said. “We can’t say anything for granted. They come out hungry, just like us, as teams that have suffered a bit. »

“A lot of people on the outside might look at the record and say, ‘Oh, this team isn’t very good,'” Campbell said. ” It’s quite the opposite. They’ve played hard against a lot of opponents, and they’re going to play hard against us. I know that, so it’s going to be a dogfight. And we’re just preparing for that.

Over the past 15 games, Iowa has thrown five touchdown passes and scored four defensive touchdowns. Counting the three safeties in that span — but not the two special teams touchdowns at the end of last season — the defense scored the same number of points as the passing game.

Nine players scored those touchdowns, but Campbell and defensive end Joe Evans both have eight points because of their safeties in the South Dakota State game.