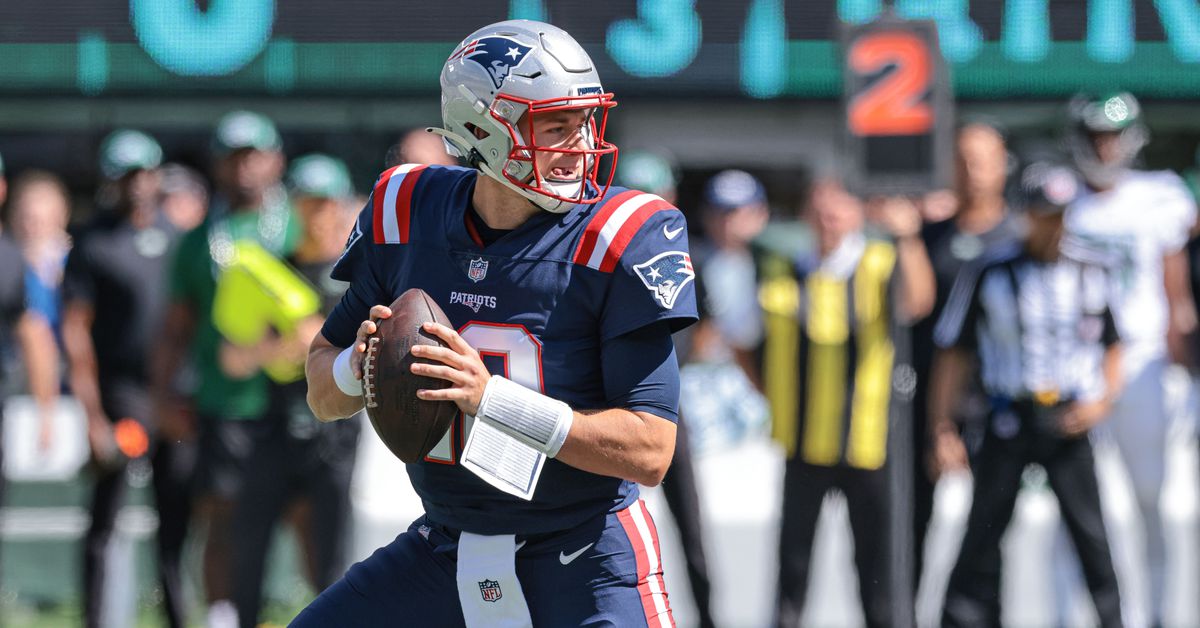 In the first third of the game, the Jets charge the area near the line of scrimmage with defenders.

This is meant to confuse the quarterback. The offense needs to determine which players are blitzing and make sure they are all blocked. It is possible that some of these players will fall into cover and will not need to be blocked. If the defense gets what it wants, the offense will get it wrong and one of the passing throwers will be unlocked. On this play, however, the Jets drop everyone in the coverage zone except the four defensive linemen.

Jones continues to hit James White out of the backfield to extend the drive.

Later in the race, the Patriots faced another third behind. The Jets again charge the line of scrimmage with potential blitzers.

This time the Jets go after Jones. Six of the seven men in the line arrive. Only CJ Mosley enters the cover. He plays the man against the tight end.

Jones looks left at the snap. It has a road combination with a vertical road on the outside and a slot exit. This is difficult to defend in the zone as the outside receiver carries the outside corner up the court, freeing his place for the lunge receiver.

If the Jets had once again let everyone down and played the zone, odds are it would have been a completion to extend the ride. However, because the Jets are blitzing, they’re in tight human cover, and that road isn’t open because Michael Carter II closes the slot window.

The blitz also comes home, and Marcus Maye throws the bag to knock New England out of the reach of the baskets.

As we move into the second quarter, before a third down play, Jones puts on protection and appears to call Marcus Maye from the right side of the roster to alert his blockers of a potential blitz. You might remember Maye had a bag on her right side during the last play we discussed.

Moving on to a third goal at the end of the first half, Josh McDaniels has seen enough. He’s going to help his rookie quarterback rather than subject him to a quick guessing game.

As the Jets charge bodies near the line again, New England sets Hunter Henry in motion.

Henry takes Adrian Colbert with him.

A player following Henry is a sign of male cover.

New England also places Henry behind another receiver in the lineup, giving him free clearance on the line. This is a game designed to beat the blitz by getting the ball out quickly, and it works while the Patriots move the chains.

We move on to the second half, and it’s third again. New England sends a moving receiver again.

The Jets’ defense doesn’t really change, however. No one is following the receiver.

The Jets play the zone here, which means you don’t need a defender to chase a waving receiver and give up the clashes. We’re back to where we started, a four-man race and area coverage. There is a twist, however. The defensive call is what is called a zone blitz, which is when defensive linemen fall into cover, and linebackers or defensive backs take their place as passers. Huff and John Franklin-Myers (orange) crash while CJ Mosley and Quincy Williams (red rectangles) blitz.

Because Williams is on his feet and a linebacker, he’s more mobile than a big defensive lineman with his hand in the turf. He is able to shoot in a gap far to his left. The Patriots don’t expect him to go that far. They didn’t set up their block to get it back. Williams then forces Jones to throw before he wants to checkdown.

And because he’s sitting in the area with the ability to scan the game, Marcus Maye can go get the soccer ball.

Considering the outsized role of the Jets turnovers in this game, the third battle down when New England had the ball didn’t have much of an impact on the outcome. I found the cat-and-mouse game interesting, as both teams continued to adapt to each other’s adjustments.

Maybe in the second meet the outcome will depend on which side adjusts the best on the third try.