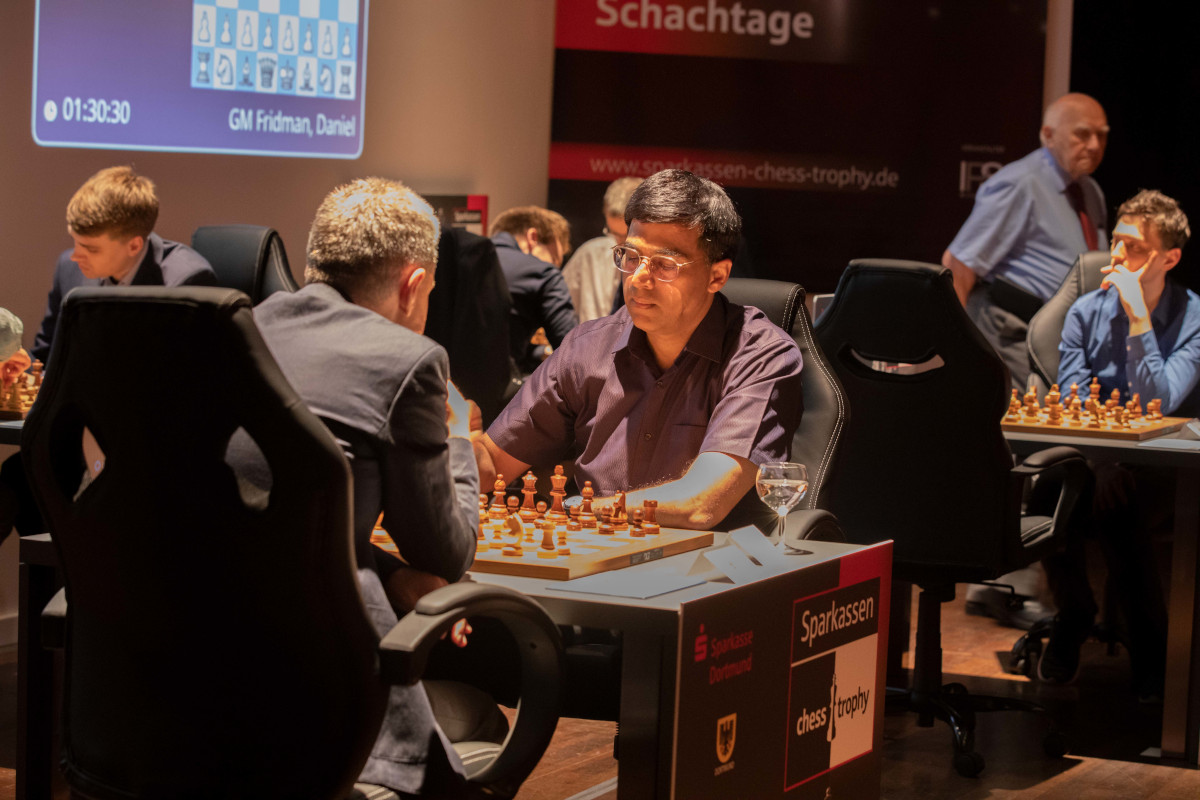 NC World Masters: Anand leads with one lap to go

The NC World Masters at the 49th Dortmund International Chess Festival saw Daniel Fridman take on Viswanathan Anand and Michael Adams take on Dmitrij Kollars on Saturday. After losing to Anand for the second time in the event, Fridman confessed:

My preparation was complete today when I went on stage. I saw that the seat in front of Dmitrij was already occupied, and I prepared myself for the black game against him. Then I improvised against Vishy.

We saw 1.Nf3 on stage for the first time in No-Castling Chess. An interesting position emerged after the opening, in which black had everything under control. Fridman went into a slightly worse final, and when he had a chance he tied by a triple rep.

The game between Adams and Kollars again saw the popular pattern of f3 or …f6 to place the king on f2 or f7. White captured the pair of bishops, but the black pawn structure was intact. Both contenders played strong, so the match was deservedly drawn.

There’s still a lot to play for in the final round: the match between Anand and Adams will decide who wins the tournament title.

There were two impressive victories in the German Grand Prix on the Golden Hall stage of the Westfalenhallen Dortmund Congress Center.

When Pavel Eljanov entered the press center after the match, there was particular praise from Vishy Anand, who described his play as “very impressive”. We have rarely seen someone beat European champion Matthias Blübaum in such a strategic way. Eljanov caught the pair of bishops early on and improved his pieces bit by bit.

Eljanov decisively captured the pawn on e4 and went on to win the game to take the lead before the last turn.

Luke McShane has played a solid tournament so far, but in round 6 he lost to Romanian star Bogdan-Daniel Deac. Deac started the match very quickly, so both players had time problems early on. In zeitnot, the youngster kept the advantage and coolly exploited McShane’s mistake 32…Ng6.

After move 40, Deac found himself in a winning position. For McShane, the tournament is over, as he is free on Sunday and will be commentating the final round live.

The decision will be between Eljanov and Deac. For Deac, it’s not just about winning a tournament, but also breaking the magic barrier of 2700.

Artem Lutsko on his way to an IM standard

Lara Schulze plays an exceptional tournament and was the only leader before the eighth round. Also on Saturday, things went well for her at the start of the match. But the advantage evaporated and then Schulze made a big blunder, gave up a piece and lost the game.

Schulze is tied for the lead with Zoya Schleining. But the WGM standard is unfortunately no longer within reach.

Leonardo Costa was clearly the strongest player today, he played very well and I deserved to lose. Luckily, I accumulated a few errors in one game today and didn’t scatter them over different games.

Artem Lutsko, meanwhile, beat GM Alexander Bagrationi with Black. The young Ukrainian is playing a big tournament and is now level on points with Carlstedt. A draw against the last player on the board, Timo Leonard, will be enough for him to reach the coveted IM standard in Sunday’s final round.

Jasper Holtel outstanding in the Sparkassen Open A

The winner of the Dortmund International Festival A-Open is almost decided after sole leader Max Warmerdam was drawn. Behind him, Jasper Holtel draws attention.

After turning down an early draw and winning in the previous round, Warmerdam was very happy with a draw against GM Andreas Heimann. Heimann accepted the draw offer after 13 moves with black. Warmerdam thus leads by one point before the last round, and the victory of the tournament will hardly be taken away from him on Sunday (the kick-off is given at 1:30 p.m.).

The duel between FM Jasper Holtel and GM Tornike Sanikidze also ended in a draw. Sanikidze had a crazy advantageous ending, but it wasn’t enough to win.

Holtel now has 5 wins and 3 draws, including two against grandmasters.

Hasbro turns Wordle into a board game