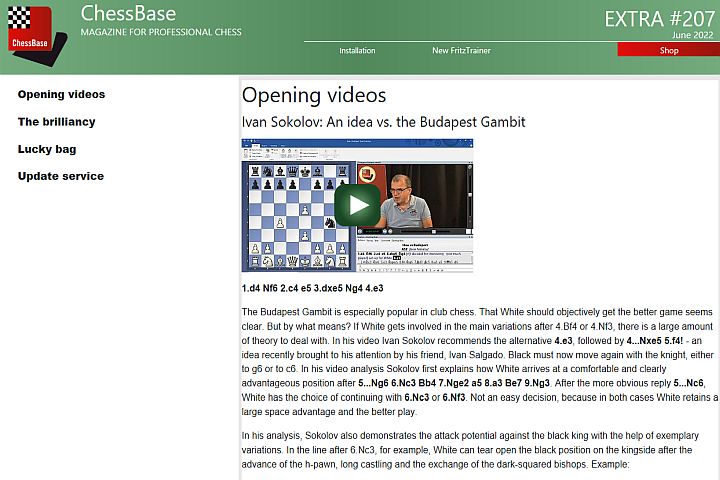 Ivan Sokolov: An idea against the Budapest Gambit

The Budapest Gambit is particularly popular in club-level chess. That White objectively gets the better game seems clear. But by what means? If White gets involved in the main variations after 4.Bf4 or 4.Nf3, there is a lot of theory to deal with. In his video, Ivan Sokolov recommends the alternative 4.e3 followed by 4…Nxe5 5.f4! – an idea recently brought to his attention by his friend, Ivan Salgado. Black must now move with the knight again, either to g6 or c6. In his video analysis, Sokolov first explains how White arrives at a comfortable and clearly advantageous position after 5…Sg6 6.Sc3 Lb4 7.Sge2 a5 8.a3 Le7 9.Ng3. After the most obvious 5…Nc6 White has the choice to continue with 6.Nc3 or 6.Nf3.

Jordan VanForest contributes “The Shine” of this edition. At the Tata Steel Masters 2022, the young Dutchman conducted an opening experience against Praggnanandhaa: 1.e4 c5 2.Nf3 Nc6 3.Bc4?! “I wanted to play this shot for a long time, but I hadn’t had the chance yet. Finally, the time had come. There are not too many good reasons why I like the shot, the main one is probably he looks so stupid . :-)” explains Van Forest. But things continued no less surprisingly after that: 3…e6 4.0-0 d5 5.Bb5! dxe4 6.Ne5 Qc7 7.Nxc6 bxc6 8.Bc4! created the following position on the Board:

“So White lost a pawn and moved his bishop three times in the opening. …” A very original game with many enlightening comments and a happy ending for the Dutchman in the end!

In addition to this game, no less than 56 other games with detailed annotations await you in the “Lucky bag”! Among them are analyzes of Nijat Abasov, Michal Krasenkow, Igor Stohl, Spyridon Kapnisis and many more.

And last but not least: the “Update Service” provides over 48,000 new games for your database!

Once again, almost all of the best players in the world are represented!

Update Service games are also included in the Mega 2022 Update Service, which you can use with ChessBase 15/16 programs (and a corresponding subscription).

Vedika, only player from Nagpur to win a medal in the 10th National School Chess Competition | Chess News