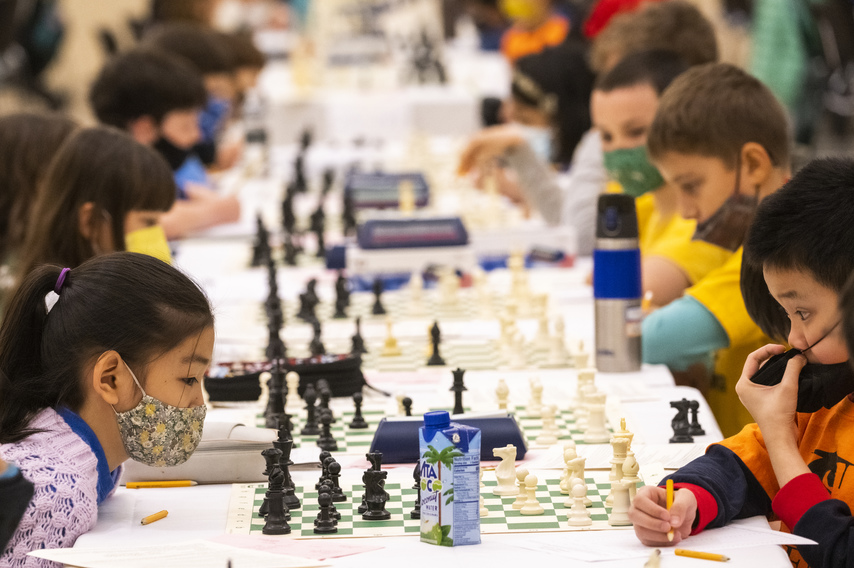 SARATOGA SPRINGS — Advait Iyengar focused intensely on the white chess pieces in front of him before making his next move against his opponent.

Iyengar, 9, a third-grade student at Hillside Elementary School in Niskayuna, was one of 900 students who took part in the New York State School Chess Championship, which began Saturday and was scheduled to continue Sunday at downtown Saratoga Springs and the Courtyard by Marriott hotel.

The tournament was canceled in 2020 due to COVID-19 and then held online last year, said event manager Daniel Rohde.

The event is a six-round non-elimination tournament. So anyone who loses a game simply plays another game against someone else who lost, and vice versa. Whoever has the highest score at the end of the six rounds is the winner. People can play both individually and for a team.

“From my point of view, that’s all they want,” Rohde said of the kids being able to play together again.

In the next room, Advait Iyengar’s brother, Aarush Iyengar, an eighth-grader at Van Antwerp College, was playing for the college championship.

Advait Iyengar said he started acting when he was 5 years old, learning from both his father, Satish Iyengar, and his older brother.

“I just like playing for fun,” said Advait Iyengar.

Satish Iyengar said he learned to play chess around the same age as his own sons when he was growing up in India.

But on top of that, the game teaches life lessons like how to make a decision when there are so many options on the board, he said.

Amid the pandemic, Advait hasn’t had much playing time with other in-person opponents, which makes him a bit nervous to play on Saturday, according to his mother, Smita Iyengar.

However, Advait said he trains against other people online, as well as his brother and father.

“I always think the other player is nervous like me,” he said of preparing and concentrating for every game.

Advait Iyengar said that when he was not playing chess, he also enjoyed reading and drawing.

Aarush Iyengar was unavailable for comment ahead of his first game of the day.

However, his mother said that chess was his passion.

“He’s been playing since he was a sophomore,” she said, noting that he played every day.

“More than one game,” she said.

Smita Iyengar and her husband both waited patiently outside the halls where their sons were competing.

“It’s amazing,” she said of seeing her two sons get to play in the tournament.

Several other young people from the Greater Capital Region also participated in the tournament.

Journalist Shenandoah Brière can be reached at [email protected]

More from The Daily Gazette: