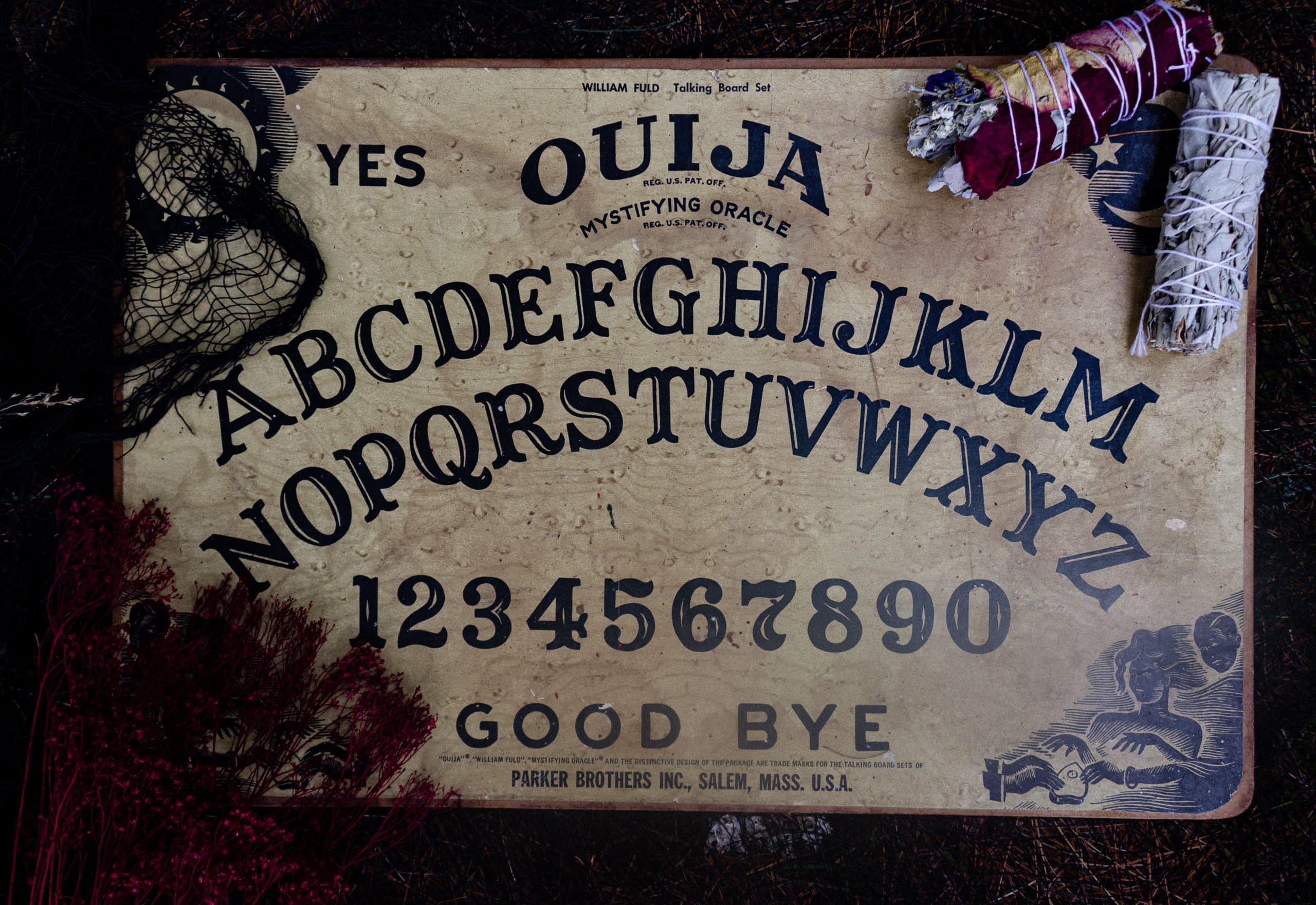 Have you ever wondered where the classic sleepover game and horror movie prop came from? The Ouija board in its current form has been around since 1891. But the fascination with the afterlife that inspired it has been around for centuries.

Let’s see where the Ouija board comes from. How has its image evolved over time? And how does it influence cinema?

Spiritualism in the United States

Spiritualism arose in English-speaking countries in 1840. But the concept of communicating with an afterlife or spirit world was not new at that time. The specific type of spiritualism that inspired the Ouija board says that the spirits of people who have passed into this world are still very much alive in the spirit world or the afterlife.

Spiritualists are people who can communicate with the dead. And this skill is considered important not only because you can get closure from a deceased family member. But because the spirits are advanced beyond humans in the knowledge of the universe. By communicating with these spirits, you can learn more about the world and expand your mind.

Some people clung to this idea at that time because, in the 19th century, death was rampant in America. Whether it’s parents who died on the battlefield of the Civil War or women and children who did not survive childbirth. Or widespread disease taking lives indiscriminately, the average lifespan was relatively low.

Spiritualism gave people the opportunity to reconnect with loved ones who had left too soon. At that time, spiritualism was not considered frightening or evil; it was just a way to reach those you can’t see anymore.

Origins of the Ouija board

Not everyone saw spiritualism as a chance to contact the dead to gain inner peace and closure. Some saw it as a way to get rich quick.

Before the release of the first official Ouija board, talking boards were popular ways to contact the spirit world. The small board had letters, numbers, and a small slider to indicate the spirit’s response. But there was a lot of variety in how the council worked. These became popular in the late 1880s and businessman Charles Kennard had an idea.

That idea was “what if I stole the talking board idea, tweaked it a bit, and marketed it better?”

He teamed up with EC Reiche, a Prussian immigrant who was an undertaker and coffin maker. As they worked together to create the original boards, Kennard left Reiche’s name on the business plans he presented to investors. Kennard is considered the sole inventor of the Ouija board.

Despite his repeated efforts, Kennard struggled to generate investor interest in the board. However, he eventually found an investor in Elijah Bond, a lawyer. Together they formed the Kennard Novelty Company in 1890, supported by funds from William H. A. Maupin, John F. Green, Colonel Washington Bowie, and the help of Bond’s sister-in-law, Helen Peters, a medium.

According to the lore they created, the Ouija board came up with its own name after asking the board what to call it. The council also told them that the word meant “good luck”.

Kennard was removed from the business in 1891, which changed its name to The Ouija Novelty Company in 1892. William Fuld, who had worked as a foreman in the Kennard Novelty Company, became the supervisor.

Fuld took out the patent for the company’s talking board and crushed all of Kennard’s attempts to create a competing board. Fuld is known as the father of the Ouija board, although he never invented it. That’s fitting, considering Kennard tried to steal all the credit early on.

A lot of drama happened…

Needless to say, there have been lawsuits and plenty of drama. Fuld’s brother Isaac was kicked out of the business. Isaac became so angry and resentful that he had his baby girl exhumed and moved from the Fuld family grave. 96 years will pass before the two sides of the family talk to each other again.

In 1927, William Fuld ended up suffering a fatal accident at his factory on Harford Avenue. He was supervising the erection of a flag when an iron railing gave way and fell from the roof. Fuld fell to the ground and, as he was being taken to hospital, a fractured piece of rib pierced his heart. He will die on arrival at the hospital.

Legend has it that the Ouija board itself recommended Fuld to build the factory.

Decades after Fuld’s death, Fuld’s family sold the board in 1966 to Parker Brothers for $1 million. It was the highest price a game had ever been purchased for at the time.

Another spooky fun fact, Parker Brothers has moved the base of operations to Salem, MA for its first year of ownership.

How does a Ouija board work?

The first Ouija boards hit the shelves in 1891 and you could buy one for $1.50. You could use it as a way to contact a relative. Or you can use it as a fun activity at a party.

So how does it work? A Ouija board worked when someone asked it a question. And at least two people get their hands on the planchette.

The planchette is a small piece of wood in the shape of a heart supported by wheels which move “by themselves” on the board. He is guided by the spirits to an answer. It points to letters of the alphabet, numbers and the words “yes” and “no” to spell words and provide answers to questions posed by players.

The board works on the basis of the ideomotor effect, a phenomenon studied in psychology. It is when muscle movements occur involuntarily, which is used to explain how a mind can control a planchette or a subject’s hand for automatic writing.

So while some may ask “Are Ouija boards real?”, the inventor and all subsequent owners of the company will say “yes – a real way to make money”.

Crazy news inspired by the board

There are quite a few stories of a Ouija board inspiring people to do crazy things – the worst being murder.

In 1923, May Murdoch shot her husband three times. Why? The Ouija board told him he was unfaithful. Mr. Murdoch would later die in hospital.

Sadly, stories like this cropped up more than a handful of times in the early 1900s.

The Ouija Board in Pop Culture

Before The Exorcist made the Ouija board a tool of the devil, the authors used it as divine inspiration for their craft. Pearl Curran and Pulitzer Prize-winning poet James Merrill The changing light at Sandover, were known to consult the board for inspiration during an episode of writer’s block.

And the Ouija board didn’t have the same malevolent connotations that the culture assigns to it today. While some people call it witchcraft and think it’s a vessel for evil, its early appearances on TV shows contradict that cultural perception. It was featured in the first season of i love lucy as a comedic stunt, Lucy shoots to find favor with a businessman.

The horror movie series The Exorcist, based on the 1971 novel of the same name by William Peter Blatty, marks a pivotal moment in the council’s identity. Although it’s not the first film to use the Ouija board as a vessel of possession – Undesirables created in 1944 – it had the most cultural impact and endurance.

Regan, a 12-year-old girl, uses a Ouija board at the start of the film. And she becomes possessed by a demon through her use of the board. The note at the beginning of the film said it was “based on a true story” added to the scare from the set.

The series went on to total six movies and a series of sequels and the Ouija board lost its light game image.

The film premiered in 1973, and America was already feeling uneasy about cults, witchcraft, and Satanism. Members of the Manson cult had just been put behind bars. Not to mention that serial killers like the Zodiac and Alphabet Killers had the country on edge.

The Exorcist and Witchboard

Once The Exorcist cemented the Ouija board as a tool of demonic possession, it found its way into the horror genre. The film Witch created in 1986 and looked into the connection between Ouija boards and evil.

In this film, the council allows a spirit named David to wreak havoc on a group of people, ending in multiple possessions and deaths. The movie ends when someone shoots a bullet through the board. While two of the characters are happily ever after, the film ends on an enigmatic note as the landlady finds the damaged board and wonders aloud if the board is still working. After throwing her into a box, the planchette answers her question by switching to “yes”.

Although the image of the board has changed, the number of sales has not. Being called a tool of the devil only made the painting more interesting for rebellious teenagers, and it became a staple of slumber party sessions.

The Ouija Board finally got a movie with its own name in 2014, and a prequel titled Ouija board: the origins of evil came out in 2016.

Once again, the Ouija board allows possession to happen, leaving most of the cast dead by the end of the film.

Whatever your belief, there’s no denying that Ouija boards are intriguing! And they continue to fascinate us all.