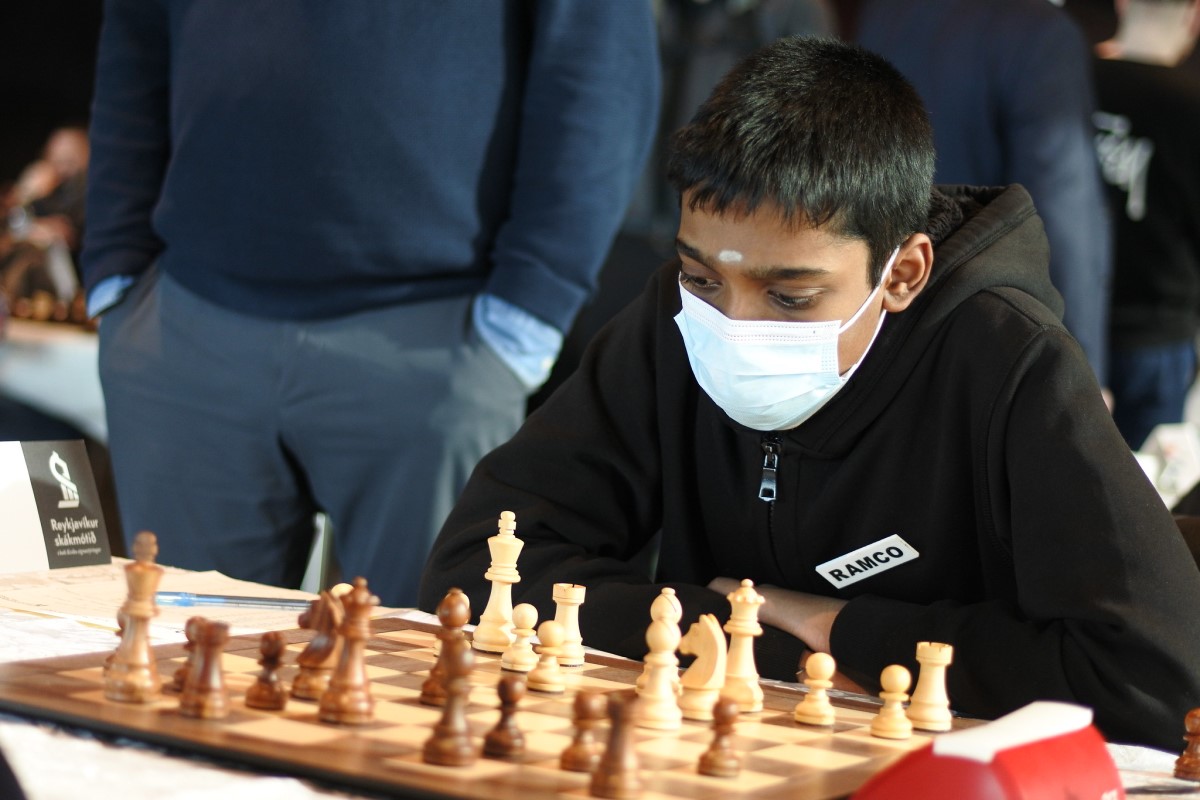 As noted in our first Reykjavik Open report, a considerable percentage of registered attendees were players aged 16 or under, as the 50% reduction on their entry fee was an effective move by the organizers. Fittingly, 16-year-old Praggnanandhaa won the tournament, while 13-year-old Abhimanyu Mishra was one of four players to finish within half a point of the Indian star.

Pragg entered the final round sharing the lead with Max Warmerdam (22) and Mads Andersen (27), two “veterans” compared to the teenager! Andersen had the white pieces against Warmerdam, and the players agreed to a draw after just 16 moves. Meanwhile, Pragg faced his compatriot Gukesh (15) with black on the next board.

Gukesh got a favorable position early on, as he had both the bishop pair and the initiative on his side. The youngest of the Indian wonderkids increased his advantage as the game progressed and was quick to secure a winning position. However, Pragg, who is still struggling, has never stopped looking for opportunities to complicate matters.

Suddenly, on move 35, a blunder by Gukesh led to an even position and, as often happens in these situations, another serious mistake followed. The resignation came a little later. Pragg had won the game and the tournament!

On board 3, Abhimanyu Mishra, the youngest grandmaster in history, had the black pieces against top seed Pouya Idani. The latter was clearly playing for a victory against his young opponent rated more than 100 points below him. But the risky approach backfired as Abhimanyu ended up overtaking him in complications to get a remarkable win.

Abhimanyu was one of four players to finish the tournament 7/9, half a point behind Pragg. This group also included Warmerdam, Andersen and Hjorvar Steinn Gretarsson, who defeated former sole leader Lukasz Jarmula with the black pieces.

Gukesh D was inches away from tying for first place! | Photo: Hallfríður Sigurðardóttir

Be careful when simplifying

A disputed endgame on board 45 in the final round caught the attention of GM Karsten Müller. In Nikash Vemparala against Askell Karason, white was down two pawns in a rook endgame, but black’s pawns were doubled on the g-file – the position was drawn.

To maintain balance, Vemparala had to keep the rooks on the board. However, the teenager (born in 2010) thought he could simplify to a pawn end to secure the half point. Unfortunately for him, he didn’t expect his opponent to have a backlash all down the line and ended up losing the game.