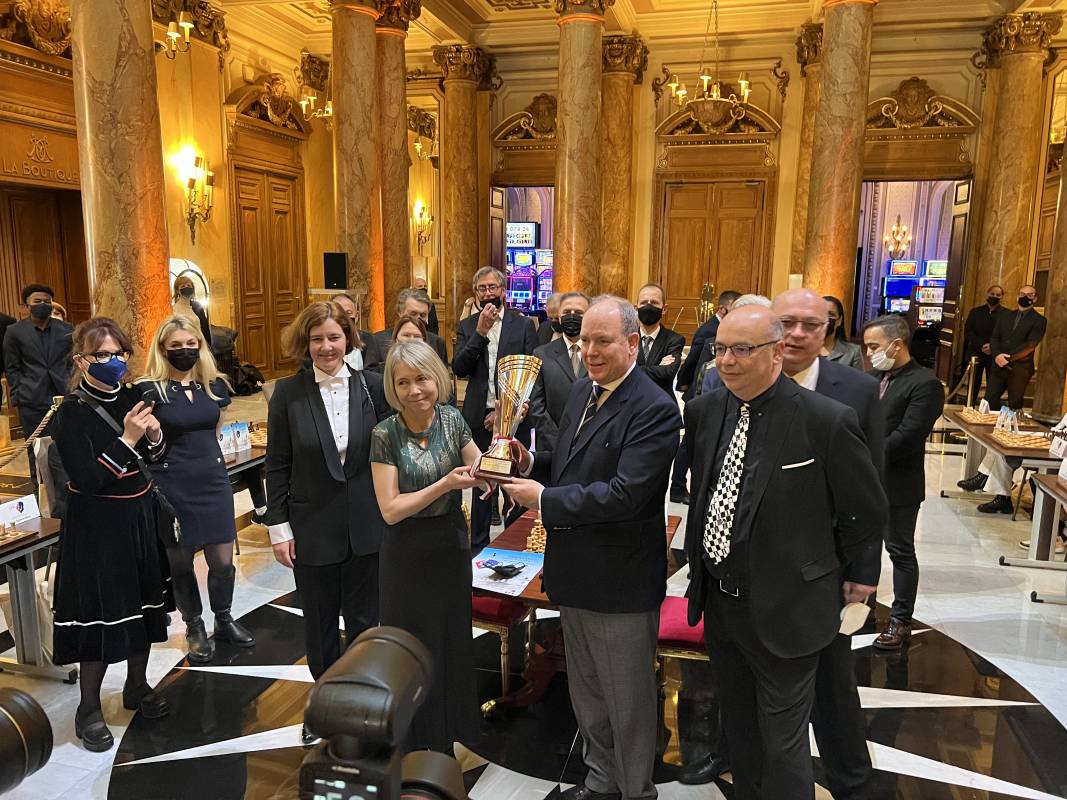 An epic chess tournament, demonstrating that chess is truly making a comeback, was held in the Atrium of the Casino de Monte-Carlo as part of the events commemorating this year the centenary of the death of Prince Albert I. Echoing the prestigious chess tournaments organized in Monaco during the Belle Epoque, a â€œSimultaneous Prince Albert Iâ€ game was played. International Grand Master Pia Cramling and International Mistress Almira Skripchenko faced 32 young players from all over the Alpes-Maritimes. Each champion played 16 matches simultaneously. Prince Albert II was invited to play the first move for each of the 32 games.

In 1903, Prince Albert I offered the Prince’s Cup to the brilliant young chess player Harry Nelson Pillsbury, particularly renowned for being able to play up to 22 simultaneous games blindfolded! A trophy was presented by Prince Albert II to Pia Cramling, the fifth woman to win the FIDE Grandmaster title in 1982 and a tireless spokesperson for women in chess. Both Pia Cramling and Almira Skripchenko have represented Monaco in the chess world and hold eight European Women’s Club Cups.

The Monegasque Commission for Women’s Rights has created a major collective work around the themes of women’s rights and the protection of the sea, which will be unveiled on March 8. 100 personalities, including Prince Albert II and Princess StÃ©phanie, participated in the creation of the painting, imagined by the artist Anthony Alberti alias Mr One Teas.

The unveiling of the artwork will take place at 4:45 p.m. at the Oceanographic Museum on the occasion of International Women’s Day. It will be followed by a lecture by Nathalie Hilmi, research fellow in environmental economics at the Scientific Center of Monaco and by Virginie Tassin Campanella, vice-president of the Scientific Council of the Institute of Economic Law, on the risks that women and the ocean have in common. According to the UN, 80% of people displaced by climate change are women and girls.

The #8MarsMonaco operation will be visible throughout the city with various works of art, located on the roundabout, in the Fontvieille shopping mall, at the Ministry of State and on the fences of the Saint Martin gardens.

On February 27, 2022, Prince Albert II, Princess Gabriella and Prince Jacques attended the French Ligue 1 football match played between AS Monaco and Stade de Reims at the Louis II stadium. Watching the team through binoculars, the twins sported red baseball caps with the AS Monaco shield. Unfortunately, the team lost the match 2-1.

Prince Albert II takes part in the Polar Symposium: “Cold becomes hot: from the Arctic to the Antarctic”

Prince Albert II of Monaco was present alongside experts and scientists from the polar region to personally convey their message to political decision-makers during a Polar Symposium held on 24 and 25 February at the Oceanographic Museum.

“Thanks to you, your research, your exchanges, your ideas, we will be able to advance the cause of the polar regions, and with it, the cause of our Planet”, declared the Prince at the official launch of the Polar Initiative. Scientists at the symposium confirmed that polar shifts are extreme and faster than expected. They highlighted how the Earth systems are all interconnected: the Arctic and Antarctica, the polar ice caps and our oceans.

The President of Serbia on an official visit to Monaco

February 22. Prince Albert II received Aleksandar Vucic, President of Serbia, for an official visit to the Principality. This visit follows the one made by the Prince on 7 and 8 October 2020 in Belgrade. The Principality of Monaco has established diplomatic relations with Serbia since 2007.

In the morning, on the Cour d’Honneur of the Prince’s Palace, the Serbian and Monegasque national anthems, interpreted by the Orchestra of the Prince’s Carabinieri, were performed before the ceremony of taking up arms, conducted by Colonel Tony Varo.

The two Heads of State had a bilateral meeting in the Family Room of the Prince’s Palace. Together, they were able to discuss international and economic topics. The two delegations then signed a framework cooperation agreement that will strengthen economic relations between the two countries. After their meeting, the Prince decorated the Serbian President with the insignia of the Grand Cross of the Order of Saint Charles.

In the evening, HSH the Prince and President Vucic attended the performance of Werther by composer Jules Massenet at the Monte-Carlo Opera.

On March 1, during Paris Fashion Week, Pauline Ducruet launched the Women’s Fall/Winter 2022/2023 collection for her own unisex clothing brand Alter. Founded in 2018, Alter aims to create clothing that embraces and inspires the freedom of the individual with playful designs that are gender neutral and eco-friendly. Princess Stephanie showed her support for her daughter’s fashion brand by attending the show while wearing a burgundy Alter leather jacket.

FAZE DOWN! OpTic Texas defeats FaZe to win $200,000 in the most perfect competitive Call of Duty Major