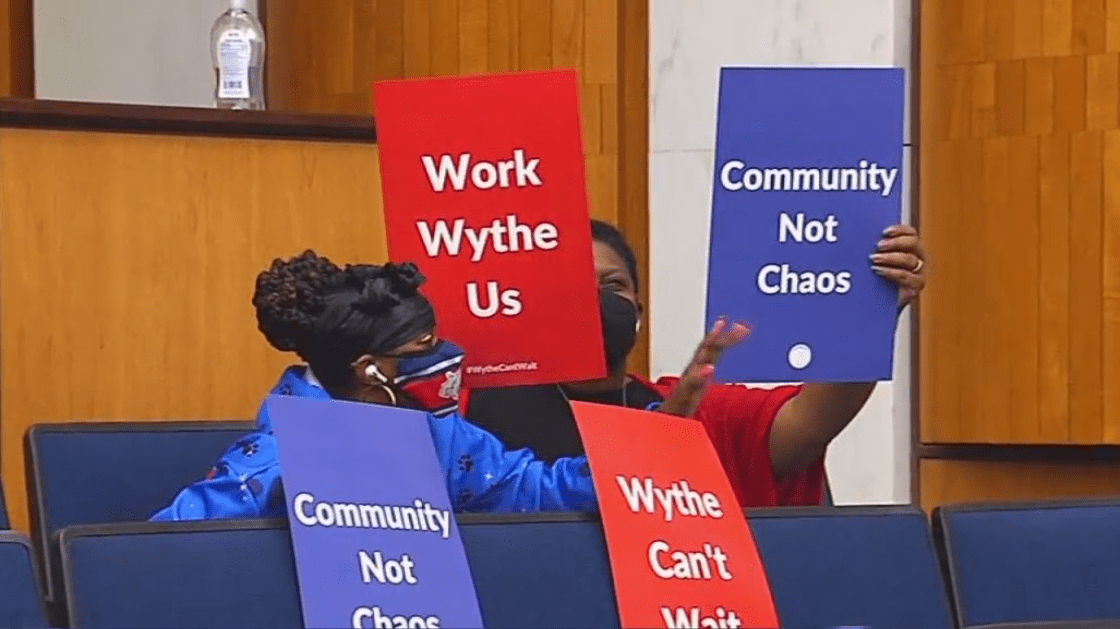 Richmond School Board accepts George Wythe’s proposal amid community frustration: ‘It’s not a deal or no deal game’

RICHMOND, Va. (WRIC) – After months of debate, Richmond Mayor Levar Stoney sent out a proposal Monday morning to “one last offer of compromise” offering to transfer $7.3 million to begin work on a new 1,800-seat George Wythe High School amid ongoing arguments over the project that have created a nasty tug-of-war between Richmond City Council and the school board.

On Monday evening, the Richmond school board finally reached an agreement on the matter.

The focus of the months-long debate over construction and funding has been the school’s capacity and whether the school should accommodate 1,600 students as suggested, or 2,000 to account for potential growth.

The Richmond School Board meeting opened Monday night with a student representative from George Wythe High School. Shaniece Gentry, a senior at Wythe, is an honor roll student and a member of the National Honor Society and the National Society of High School Scholars.

Gentry took his time to open the meeting, explaining how “it is urgent that the new George Wythe be built as soon as possible”.

“While it’s critical that the school be built to accommodate the Southside’s growing population, the resources inside the school are equally important,” Gentry said.

She went on to explain that the school lacked desks and chairs, “many of which are broken”. She added that the school’s technology, smartboards, projectors and lab equipment are outdated and materials normally used for learning in schools are sorely lacking.

“We didn’t have manuals to use, review/study for testing,” Gentry said. “So my classmates and I had to rely on a third-party site, like Quizlet, to study just to make sure we understood the material”

“Please, please, I don’t like to beg, but please. It’s not a deal or no deal game,” Erby pleaded.

She referred overcrowding at River City Middle Schooland said to avoid the same fate, the new George Wythe will need to be able to accommodate more than 1,600 students.

“Why go low when you can go high…We need a bigger building,” Erby said.

Theresa Slaton was another speaker at Monday night’s meeting who argued for building a new school larger than the model originally proposed by the council. She opened her statement on Monday by naming several new housing estates in the Southside.

“The growth is there, the development is there, I think the school board should follow what we see happening in the city,” Slaton said. “We see new buildings, we see growth. May our schools also model and reflect this.

“Let’s do this, so we can move on,” Slaton said as he finished his statement.

The Richmond branch of the NAACP sent out a statement Monday evening, commenting on the continuing disagreement between the school board and city council, saying the issue “has been a hot potato for too long” and suggested, “That architectural plans should include the ability to add a wing for several hundred additional students when population projections indicate that growth warrants expansion.

The NAACP of Richmond called on the school board to “stop posturing, release the money, recognize and move forward immediately with building a school for 1,800 students.”

Dawn Page, School Board Member proposed during the meeting to “direct the administration to attend to the construction of George Wythe Secondary School, meeting the requirements of a capacity of 1,800 pupils”.

Kenya Gibson then returned in response and suggested an amendment to move forward with the design of a 1,600 pupil school which includes a design option for a potential future addition for an additional 200 pupils. The amendment was later withdrawn by Gibson.

The council voted and passed the original motion presented by council member Page to build a school with a capacity of 1,800 pupils – in line with Stoney’s latest offer in compromise.

“We need to have schools that are truly built to serve our community,” Dr. Shonda Harris-Muhammed said just before the vote.

Richmond City Council is expected to vote on Stoney’s funding proposal on April 25. If approved, the city will transfer $7.3 million to begin construction of the school.

Colorado wants to have an esports team in half of the high schools in the state. Meet the pioneering players on this journey