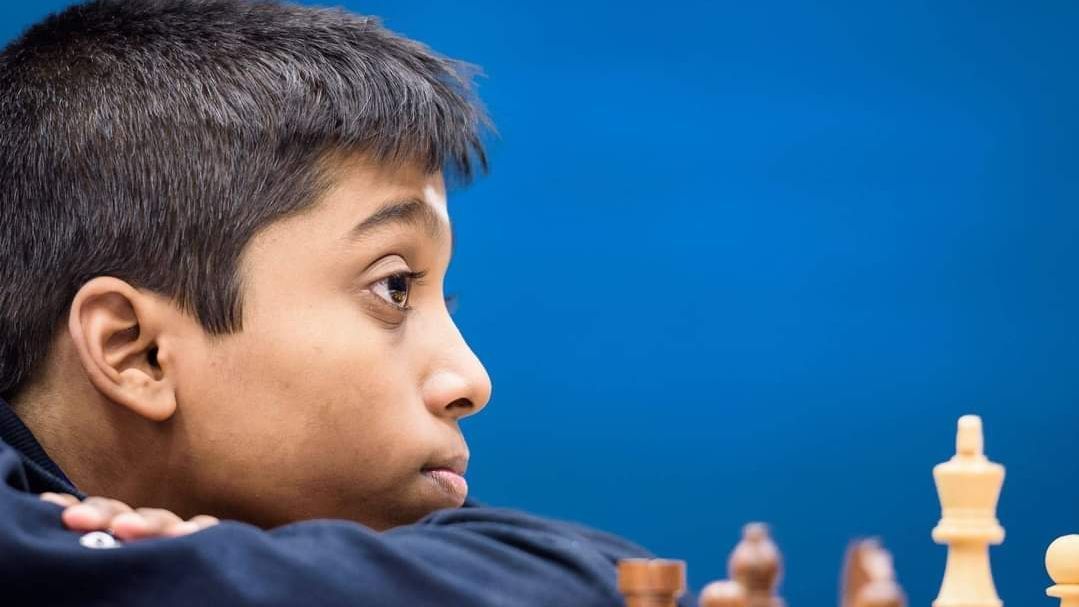 The way 16-year-old R Praggnanandhaa says it, he makes it sound like the most normal thing in the world. “I decided to play this tournament [because] it was a study break during my exams. I was thinking of playing in the evening and studying in the morning.”

“That tournament” was the Chessable Masters 2022, an online quick time control event in which he finished second. Last week, Praggnanandhaa had studied (and taken) his 11th standard exams in the morning and then beaten some of the best players in the world in the evening. Including the best: Magnus Carlsen, world No. 1 and one of the GOATs, in the group stage (second time this year, by the way).

“I didn’t expect me to go to the final and it would be [clash with] my exams. Somehow I made it and so far” – and this is where we are once again reminded that we are talking to a real Indian schoolboy – “I passed my exams well enough.”

It’s been an exhausting week, and he looks the part. Dressed in his usual slightly oversized dark blazer, a thick line of temple ash across his forehead, his large eyes look a little tired as he leans back on the arm of his computer chair. He must have been woken up just before that press conference, after taking a nap after that computer application exam.

“I didn’t expect managing the two to be so difficult,” he said with a slight smile. “I realized that studying also makes you tired… So you’re doubly tired! I haven’t slept enough… The [final] finished around 2:40 a.m. [AM IST] and I slept around 4 o’clock. I was lying in my bed thinking about the game. And then I had to wake up at 7 o’clock. It’s a bit difficult to deal with these things, but that’s normal for a chess player.

You can feel Praggnanandhaa trying to minimize everything, trying to normalize the extraordinary. This is really not the case. In a strange coincidence, however, his coach RB Ramesh faced a similar situation 27 years ago.

Ramesh had qualified for the Senior National Chess Championships in 1995 as one of the youngest ever, but the tournament itself was unfolding when he was due to appear in his standard 12th board. With matches in the early afternoon, “I finished my exam, took a rickshaw to the stadium and played the nationals,” he laughs.

Ramesh has been with Praggnanandhaa for almost a decade now and is proud to list the milestones that mark his steady rise to the upper echelons of the chess world: the youngest international master in history, at the time (10 ), the second youngest Grand Master at that time (12), and crossing a 2400 mark at 14, which Ramesh believes Praggnanandhaa to be the youngest to do.

“After implementing the IM standard, we knew it was just about hitting the milestones one by one,” he says. “He’s 16-17 in a few months – and his rating is 2642 now. That’s 42 points over the last two and a half years, but that’s mainly because he hasn’t played. during the pandemic. In a way, it helped Pragg. It gave him time to work on a lot of areas that we didn’t have time to work on before. For example, before the lockdown, he was in largely an E4 player but during lockdown he had time to learn D4 and many other black piece openings and is trying to expand his opening repertoire.

The work pays off. Having previously (largely) ignored online games and the rapid chess format, they have now fully embraced it. “There was an online tournament last year where the best junior players in the world played, and the winner qualified to play in the Champions Chess Tour…and that’s how Pragg got here (the Chessable Masters is the fourth of nine rounds of the Tour).”

Ramesh thinks it was the right decision. He can see a tangible difference in Praggnanandhaa’s game: in his time management, in the confidence he has in his decision-making in the moment, in the “quality of his thinking”.

This self-confidence also means he doesn’t rely on pre-match preparation as much as he used to. Praggnanandhaa agrees: “I didn’t really care about the preparation for this tournament, I just wanted to play with my excessive strength and see what would happen. Even on the last day of the final, I probably prepared for about half an hour. about an hour.”

That, the ability to completely let go of something he once depended on so much, is part of the quality that Ramesh says defines Praggnanandhaa. “He thinks anything can be learned in chess…that’s the main distinguishing factor between Pragg and other talented players.”

Ramesh likes the fact that his student would rather confront and overcome a problem than avoid it altogether. “Pragg understood at a very young age that he was talented – he knew for sure that he was extremely talented – but he is also extremely ambitious and hardworking. He knows he has to keep getting stronger and stronger.”

It’s 8:45 a.m. and guess what Pragg is doing right now? He is busy scribbling down his business knowledge on paper! 7 hours after beating world number 10 Anish Giri, Pragg is busy taking his 11th grade exams! And in 12 hours, he will face world No. 2 Ding Liren! pic.twitter.com/iqQn7kGgyH

Part of that includes not celebrating mini-victories along the way. Like this run in the Chessable masters. “Our philosophy is that in a sporting career, and we hope to have a long one, it’s very important that we keep a perspective on what happens to us in the short term. We shouldn’t overreact to what happens in a game. -for -game or even from tournament to tournament Winning, losing and drawing are just different experiences and we can always learn something from each of them.

Easier said than done, surely? How can you beat the best in the world and still go on with something as mundane as studying for a business test? For Praggnanandhaa, however, it’s just a matter of logic: “I don’t party at all. [Beating the top players once or twice] is nothing compared to what they have all achieved.”

Finishing second in such a tough field is only part of the process. “There’s a lot to learn,” says Praggnanandhaa. “I have to review games to analyze where I went wrong and how I could improve. [For example] in the first game of the final, the two games I lost are something I can learn from. Positions with white, I was just dominated, which shouldn’t happen so easily.”

So now he’s back on the board, where he’ll spend hours and hours ironing out his weaknesses, preparing for the upcoming tournaments, including the Chess Olympiad that India is hosting. 2022 has already been quite a year – on Thursday he was also inducted into the Indian Oil Corporation, a tenure-based commitment that will become a job once he turns 18.

India confirmed as host of Chess Olympiad 2022: everything you need to know

“These last four to five months have been a turning point in Praggs’ career,” Ramesh said. “He also realizes that he is improving very quickly.”

If what we’ve seen so far means anything, this realization will only spur Praggnanandhaa on as he continues on this seemingly inexorable path to greatness, one square at a time.

Sega will reveal a secret “new project” next week