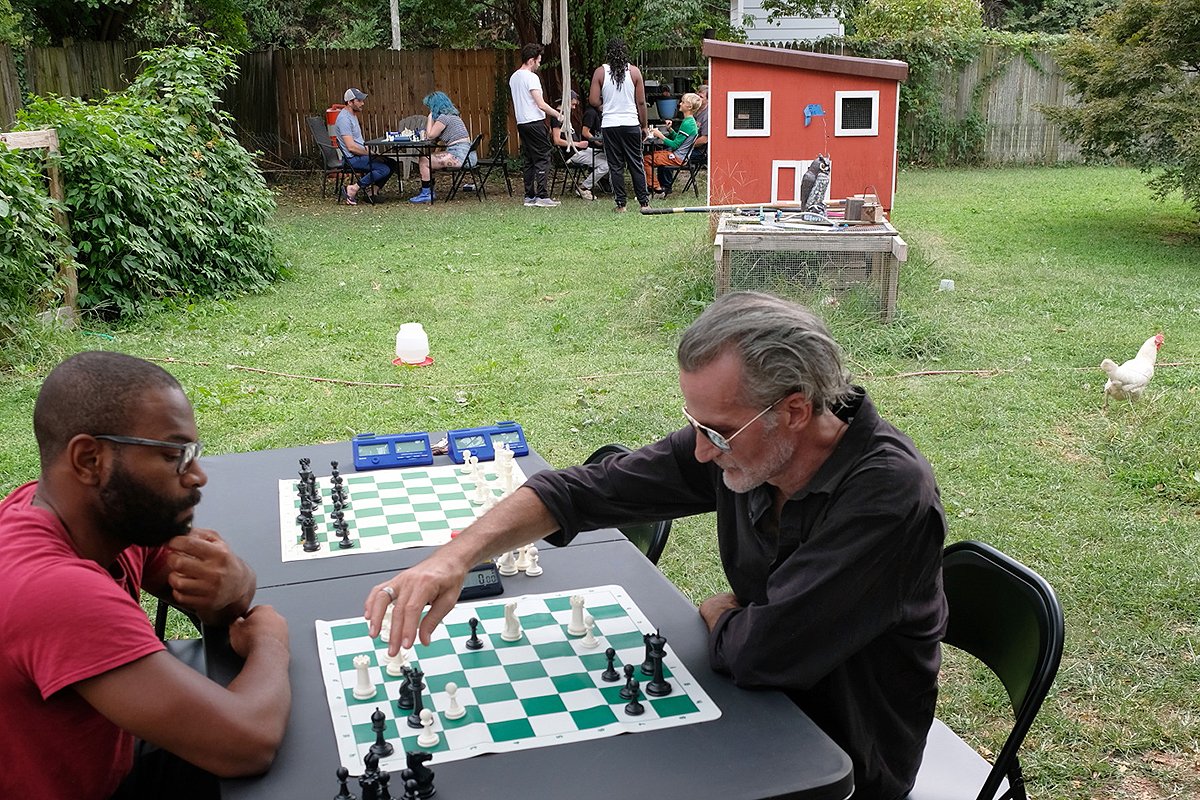 Their gatherings may seem moderate, but members of RVA Pieces: The Richmond Chess Club – who uphold the tradition of silent concentration while the games are in progress – are full of enthusiasm for the game and their time together.

“Friendships through chess last a lifetime and will continue to last a lifetime,” says club treasurer Eugene Gateley, who readily lists the names of the friends he has made and kept since. that he started attending chess meetings in 1992 at the Village Cafe on Grace Street.

RVA Pieces, founded in 2015, now meets several times a week at various locations. Monday evenings are spent at GWARbar in Jackson Ward and, weather permitting, nearby Abner Clay Park. Thursdays are at the Slingshot Social Game Club at Scott’s Addition. On Saturdays, the group meets in Monroe Park after an early morning session at the Richmond Main Library on Franklin Street, where children of all ages (and their parents) are invited to come and learn the ancient game.

“When people ask if they should come, they usually say, ‘I’m not very good,’ so it’s important for us to say they’re fine,” says Spenser Kearns, group president and member since 2015. ., when he was a student at VCU.

Kearns, who was a competitive chess player in elementary school, walked away from the game in high school but returned to the game in college. He says he carved his way to a leadership position by organizing the first RVA Pieces tournament, held years ago at Gallery5, where the group met before the pandemic. Now Kearns hosts monthly tournaments in his backyard, where his three chickens roam among the players.

The origins of the game date back to the 6th century and an Indian game called chaturanga. The structure of chess evolved as it moved around the globe, becoming recognizable as the game we know today only in the 16th century. The rules that players follow today weren’t solidified until the mid to late 19th century.

The game is enjoying a resurgence in popularity, RVA Pieces officials agree, due to the popularity of the Netflix series “The Queen’s Gambit” and the time available during the pandemic for people to learn the game and play online. But nothing beats a human connection.

When she came to a club meeting at the end of 2021, “I had been playing for three months”, explains Hannah Hahn, club secretary. “I was nervous about coming because I was the only girl. But people are never condescending or mean. For the most part, people are eager to teach you. And you have people to hang out with. .

There’s a lot to be learned from chess, Gateley notes.

“I think chess helps you control your emotions and think logically,” he says. “If you have trouble sitting still or concentrating, you need to concentrate. [while playing] to focus on what you’re doing.

Kearns notes that regardless of the outcome, the game is a learning experience.

“Chess is a game of which we understand that losing is a necessary part [of the process] get good,” he says. “If you’re the type of person who can’t stand losing, you’re not going to like this.”

Jack Barrow, described by Kearns as one of the club’s strongest players, is relatively new to the squad but has been playing for over 25 years. He says timed games, played against the clock, can be stressful, but every game has an opportunity for growth.

“You can go back and reflect on why you made mistakes,” he says, noting that online resources also give feedback. “An algorithm will spit out how well you played and give you an idea of ​​how well you played.”

Tournaments also help players gauge their progress, as they compete against people they don’t usually play with. Ten members of RVA Pieces traveled to Charlottesville in mid-July for a tournament, and the group is seeking 501(c)(3) nonprofit status so they can host their own Federation-sanctioned tournaments. failures.

One RVA Pieces member who regularly seeks out tournaments is Sean Beavers, a junior at Henrico’s Deep Run High School and the 2021 Virginia Amateur Champion.

The Beavers started playing chess with the group soon after his parents taught him the game.

“I think I started taking Sean to Monroe Park on Saturdays and leaving him there to play chess, when he was 12,” says his mother, Bonnie. “He was physically small at the time, and I think some people were surprised that such a small kid would show up on his own and seem to fit in perfectly. For me, the other players have been opponents and coaches brought together in just one.”

Beavers says he doesn’t remember being worried about playing against adults.

“It’s always exciting to play against people who are better because you learn more,” he said. “I think I was more excited than nervous to go to Monroe Park.”

The appeal of the game is simple, he says. “Chess is simple to learn and play, but beneath the surface it is really complex. There is a very high skill ceiling. You can play casually or competitively. There are so many different levels of players , you can always find what you are looking for.

At this year’s National High School Chess Championship, held in April in Memphis, Tennessee, Beavers was the only player to win a game against Grandmaster Ben Finegold. In an interview afterwards, Finegold said he tried too hard to win against the youngster. Beavers says a draw would have been more likely, but Finegold “overstepped” themselves, which created an opening. This is also part of learning.

“If you don’t win easily or you’re in a difficult position, you start thinking a lot more and that makes you a better player,” he says.

Beavers agrees the camaraderie of in-person competition is also appealing.

“It’s more fun to play with people because there’s human interaction,” he says. “If there’s a cool tactic, you can share the moment with them. It’s a give-and-take.

Never miss a Sunday story: Sign up for the newsletter and we’ll deliver a new read to your inbox at the start of each week. To follow the latest stories, search for the #SundayStory hashtag on Twitter and Facebook.