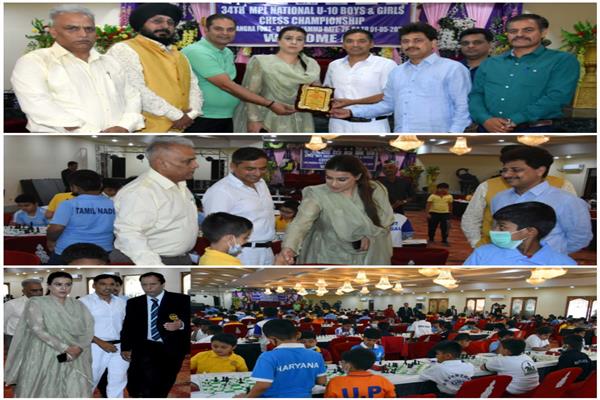 Srinagar, April 26: (KNS) In what is proving to be one of the mega chess events in J&K’s union territory history, the 34th MPL U-10 National Chess Championship has kicked off today in Jammu. More than 500 participants, including players including both boys and girls in addition to technical officials from 26 states and union territories across the country, are taking part in the event. The event held at Kangra Fort Barnai, Jammu is organized by the J&K Sports Council and the J&K Chess Association, with the Crown Trust also taking part in the sponsorship.

While interacting with the participants, the Sports Council Secretary said it was heartwarming to see the young brains trying to get the best out of each other by performing moves on the chessboard and adding to the focus, creativity and player confidence. She said the Sports Council has adopted the policy of “inclusive sports” which aims to reach all athletes, regardless of where they are from. I am sure that the My Youth and My Pride special initiative will bring encouraging results in the times to come, she added.

Furthermore, she said that the Sports Council is investing time and resources to ensure that our young people benefit from all the facilities like those provided to their counterparts elsewhere in the country. She impressed when training and engaging as many people as possible. She said chess has the advantage of being played indoors and can proliferate in rural and tribal areas. The Secretary of the Sports Council also gave instructions on the spot to organize camps in the border areas for maximum engagement of young people.

She also praised the Chess Association of J&K for hosting mega-level tournaments and inviting players from other regions as well.

The event carries a prize of five lakh rupees which will be awarded to meritorious chess players of different categories with a sum of seventy thousand rupees for each category. Talented players with good potential will be selected into selection teams to represent the country in World, Asian and Commonwealth events.

The Chairman of the Organizing Committee and President of the All J&K Chess Association, Atul Kumar Gupta, said on this occasion that Crown Trust is organizing this event under the All J&K Chess Association banner with the support of the J&K Sports Council. He thanked Sports Council Secretary Nuzhat Gul for his keen interest in promoting sports at J&K. He also thanked Divisional Sports Officer Ashok Singh for his cooperation and support. He also thanked Digvijay Singh, owner of Kangra Fort, for personally overseeing the grand arrangements.

All the attendees were impressed with the venue and appreciated the facilities put in place and praised the hospitality of Jammu. The top 10 matches from the event will be streamed live around the world with support for DGT maps which are being used for the first time in J&K. Top expert K Moorthy, Tamilnadu has also been invited for live match coverage along with Chess Base India cameraman Aditya for event coverage for the entire duration of 6 days.

The event is part of the special sports initiative MY Youth My Pride organized by the J&K Sports Council in collaboration with different registered associations of the respective games. (KNS)

It’s (still) not the time to trade KAT