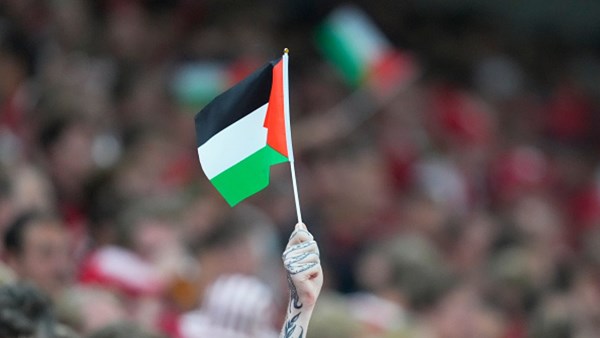 The small town of Nailsworth in the west of England saw their side play in the top leagues for the first time in their 133-year history at three o’clock on Saturday August 20.

Plymouth Argyle and Forest Green Rovers faced off in the encounter, which took place at their home stadium, the New Lawn Stadium. In a merit-based system that places teams in higher or lower categories based on their performance in the previous season, Rovers were climbing the rungs to English Football League One for the first time.

Rovers, sometimes known as the ‘green club’, are the first professional sports team in history to receive a UN certificate confirming their carbon neutrality. Although spectators can bring their own, they do not sell meat or dairy products at their concession stands. Additionally, the club encourages and adheres to green policies.

However, the Palestinian flag also flies proudly in the stadium. The club’s dynamic owner, Dale Vince, is a strong advocate of Palestinian concerns and challenges the conventional wisdom that politics and sport shouldn’t be mixed.

Solidarity with #Ukraine is broadcast in stadiums around the world, breaking the non-political sports doctrine.
On the other hand, athletes and football clubs have been fined and even punished for showing their support for #Palestine.
Who politicizes the case? #Russia pic.twitter.com/GVZ6Sxjyfl

Vince bought the team in 2010 and funded its most successful period. His vision includes flags, no greasy burger trucks near the stadium, Sea Shepherd clothing and vegan food ads.

In April this year, he posted a photo of the Palestinian flag with the caption: “We flew this flag at FGR. [Forest Green Rovers] game today. In Solidarity with Palestine… Palestine has been besieged by Israel – by air, land and sea, for decades. The United States allows this, pumps billions into Israel to support its economy and military, and uses its veto to block any meaningful UN action.

We flew that flag at the FGR game today. In solidarity with Palestine.

The conflict there has all the same ingredients as the one in Ukraine – invasion, occupation, killing of civilians, destruction of homes and hospitals – and sieges. pic.twitter.com/D6a2nqCuMz

The representative of the Palestine Liberation Organization (PLO) in the United Kingdom, Husam Zomlot, was also invited by Vince on April 30. In 2019, Vince also hosted Jermy Corbyn, the former Labor Party leader well known for his unwavering support for the Palestinian cause.

I express our deep gratitude to you for your solidarity with the people and the just cause of Palestine. We look forward to the day @FGRFC_Official visit Palestine for a friendly match in Jerusalem, the liberated capital of Palestine. Thanks @DaleVince ✊🏽🙏🏽#Palestine #RGF https://t.co/oej5V1GK8d

On the other hand, Israeli lobbies and media could not handle the fact that a Western football club did not approve and applaud their ethnic cleansing of Palestinians, and therefore adopted classic tactics of defamation.

UK Lawyers For “Israel” (UKLFI) sent Vince a letter outlining their disapproval of his behavior on May 25.

“Vince and the FGRFC have clearly used sporting events for non-sporting events and have brought sport into disrepute. They are in clear and flagrant breach of these provisions,” UKLFI Director Sam Green said, although Green and his UKLFI cronies did not send a single letter denouncing the Ukrainian flags raised during the European football matches.

This month, Vince was accused of anti-Semitism in an article by Israel Hayom. With the statement, “As for Jewish football fans, it is best that they do not attend these matches, especially if they are wearing something identifying them as such”, the play reached its height of hysteria.

Read next: Iran withdraws from hockey championship over ‘Israeli’ participation

Over the years, a number of British football players and football fans have shown their support for Palestine, in particular Celtic FC of the Scottish Premiership, who frequently fly the Palestinian flag. Other football players, like Manchester United’s Paul Pogba and Manchester City’s Riyad Mahrez, raised the flag in favor of Palestine.

Their actions coincided with Israel’s 11-day war on Gaza in May last year, which resulted in the martyrdom of more than 200 Palestinians.

Emanuel Reynoso at the head of the Loons wave