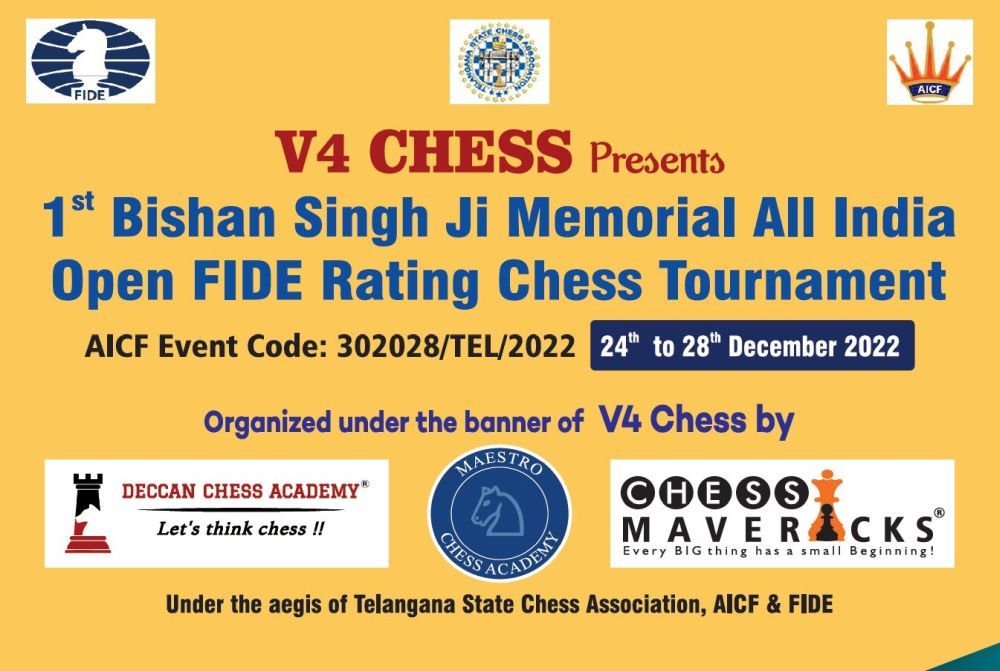 V4 CHESS is a trust formed by the four leading chess players based in Hyderabad since the 1990s.

These four chess friends who are also coaches, parents and organizers have teamed up to promote the game of chess through various programs such as chess tournaments, training camps and other promotional activities that will raise awareness of the chess game to the masses and will help budding youngsters and aspiring chess players realize their potential and pursue their dreams.

As part of its first initiative, V4 CHESS is organizing two chess tournaments in India, namely…

Both of these tournaments will be held at Kotla Vijay Bhasker Reddy Indoor Stadium, Yousufguda Hyderabad, Telangana.

In total, the prize fund for these 2 events is Rs. 20,00,001/-. For all titled players, the entrance is free and attractive category prizes are also at stake. puzzles, the prize for the best game after the end of each round and a convenient seating arrangement for accompanying professionals as well as quality food courts. For details and registration, players can visit the Official site.

The first V4 CHESS tournament is called Late. Shri Bishan Singh ji who was a prominent chess player, coach, national arbiter, APCA office holder and organizer. To promote a sport, you have to be passionate about it and the passion for the game of chess came naturally to Bishan Singh ji. Although he was a district champion, Bishan Singh ji knew that chess needed to be promoted to the level where it could be considered a career option for budding young talent. His work first started in Karimnagar, laying the foundation of the Karimnagar District Chess Association and eventually progressed to other districts in the state. He became the head of the AP State Chess Association in the early 90’s. He worked selflessly to make chess popular in the state. An example of this can be seen in his four sons whom he encouraged to play chess and they were all successful national level players and finished in the medal category several times at national championships. His sons take great pride in hosting his memorial tournament with his family and friends and furthering his legacy.

His family has held state-level tournaments in his memory since 2017.

The V4 Chess Tournament Brochure was released by Mr. K.S. Prasad, Chairman of Telangana State Chess Association at a press conference on 17th October 2022 which was covered in all major newspapers and electronic media. TV5, one of the main regional electronic media, has agreed to be the media partner of this prestigious event.

When it comes to promoting chess, the four friends from Hyderabad stand strong and tall as the 4 pillars of Charminar and we wish them every success in their V4 CHESS – We are for Chess initiative.